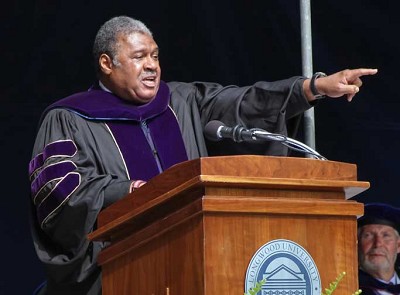 LU Graduates Can Change The World

FARMVILLE – Longwood's graduation Saturday marked the public return of the university's president, Patrick Finnegan, who had been away for several weeks dealing with medical issues.

And what is likely his last public appearance as president of the university. His resignation was announced Tuesday, effective June 30 (see front page story).

“What a beautiful morning. Your special moment has arrived,” the retired Army general told the graduating class. “…This is a great day. It's your day.”

In return for the preparation they've received at Longwood, he told them, “we expect much of you. No matter what changes come your way, we know that you will conduct yourself with integrity, awareness and compassion. That's what we expect from citizen leaders.”

There is greatness waiting to be realized in leading one's daily life to the best of one's ability, President Finnegan advised the 1,027 students set to receive degrees.

“You may not lead an army into battle, as did Joan of Arc, you may not be founder and CEO of a Fortune 500 company or serve as president of the United States, but you absolutely can be every bit as great as they are,” he assured them.

“Be great in your own city, your own neighborhood, and, most important, your own family,” Longwood's president said. “Be a person who uses fairness and honor to lead and there is no limit to what you can achieve.”

Notes from that melody were harmonized into a common theme during the commencement address delivered by former Virginia Supreme Court Justice John Charles Thomas.

The first African American appointed to the state's supreme court, Thomas told graduates they could change the world, one small daily step at a time.

“What I do know is that, in truth, with small steps, bit by bit, every day, every hour, the little steps, the little things can change the whole world, because if you went far enough back in time you would see a little trickle of water start carving out the Grand Canyon. That's the truth. It came from erosion,” said Thomas, who served on the state supreme court from 1983-89 and is now a senior partner with Hunton & Williams, in Richmond.

“And so just a little bit over time, put together, has powerful results…You by yourself can't change everything…But if all of you work with fairness and honor and fortitude and determination to do the best job you can ever do anywhere that you find yourself,” he said, “the world will feel the presence of the class from Longwood of 2012 because together you can move mountains. Yes, you can.”

Thomas, who received an honorary Doctor of Laws degree prior to his speech, compared graduates to a trapeze artist flying through the air, reaching out toward the next swing.

“And here at Longwood you've gotten into the swing of things…You leave Longwood like that trapeze artist at the top of your game. You're up there high…It's a powerful moment in your lives and so like that artist you're going to reach out,” he told them, speaking with power and emotion, “and we believe you have what it takes to grab the next ring. You've got to have faith to do that. It's going to take the same perseverance that it took to get here today to do that but we know that with what you've learned at Longwood you can and will be able to change the world for the better.”

And the troubled world needs every good thing you can bring to it, he counseled.

“As I look out at you and your youthful energy and you at the top of your game, and you with the resolve that got you here to this day,” said Thomas, who spoke almost entirely without consulting prepared notes or text, “I know that the solution for what ails us here in America and in the world is right here in front of us. You got it in you.”

During the prize-giving, the Sally Barksdale Hargrett Proze for Academic Excellence, awarded to the graduating senior with the very highest grade point average, was shared by six students, each of them having a perfect 4.0, including Megan Ashley Hendrick, of Farmville, who earned a B.S. in liberal studies.

Jeff Halliday, assistant professor of communication studies, was presented the Student-Faculty Recognition Award, given to honor a member of the faculty for professional excellence and devoted service to students. Halliday arrived on campus five years ago and teaches in the mass media concentration and advises WMLU, the campus radio station, The Rotunda, and “The Longwood Show.”

Put Real Meaning Into Your Life