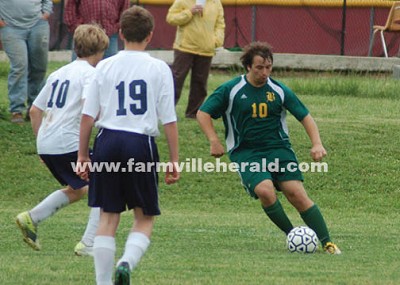 CHARLOTTE C.H. – The Buckingham County High School soccer team got off to a quick start in its James River District match at Randolph-Henry on Monday afternoon and was never really challenged in a 5-1 victory that helped the Knights remain tied in the loss column with Goochland.

Buckingham forward Bobby Dandridge put the Statesmen at a quick disadvantage with a goal in the eighth minute. He followed that up with goals in the 20th and 24th minute to achieve a hat trick barely halfway through the first period.

Buckingham (6-0-1 JRD) went ahead 4-0 on a Randolph-Henry own goal just before intermission.

“We passed the ball well extraordinarily well today,” said BCHS head coach Chuck Meek. “Our guys are starting to get healthy. We seem to have been missing one piece here, or another there, but now everyone is back, and we're developing a chemistry.”

Randolph-Henry managed to better control the speedy Buckingham forwards in the second half. The Knights had chances to blow the game open, but were either turned away or had shots sail over the crossbar.

Randolph-Henry junior forward Grant Cooper got the Statesmen on the board in the 64th minute.

Four minutes later, Buckingham's Mike Amos put any thoughts of a comeback by the hosts to rest with a goal from 16-yards out. Amos worked his way from the far side of the field, parallel to the goal across the R-H defensive line and buried a shot just below the crossbar.

“We did a good job of creating opportunities to score,” said Meek. “We weren't able to hit every shot, of course, but due to the way we passed, we gave ourselves some good chances.”

The Knights were scheduled to travel to Central on Wednesday, and then to Nottoway on Friday.

Due to the weather, Meek said that the Knights have seven games remaining, including a home match against Goochland on May 9.

Presently the two teams are tied with no losses in district. They played to a 3-3 tie earlier in the year at Goochland.

“This league has definitely gotten better with the three additions [Bluestone, Goochland and Nottoway]. We're not scoring the way we were last season, but I feel that we're playing better quality teams across the board.”