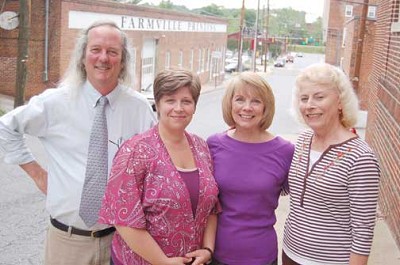 “A fantastic showing. The entire Herald team is very proud of them,” said editor Ken Woodley.

Three entries received first place honors and will now proceed to the National Federation of Press Women's Communications Contest to be held later this year. Those first place entries were for her continuing coverage of the legal services decisions made by the Cumberland County Board of Supervisors in 2011; a photo essay for the 2011 coverage of Cumberland's Patriot Day; and a photography-writer entry on Bear Creek Lake State Park.

The judge for the photo essay of Patriot Day said, “The photos here definitely make it seem like a good time was had by all. Wish I could have been there.”

The Bear Creek Lake State Park's story received remarks that stated, “The park is a great way to spend a day and the story and photos describe it perfectly.”

Harris also received second place for her feature photo “Celebrating The Red, White, And Blue,” which captured fireworks from July 4 in the area.

The judge said, “Good fireworks photos are hard to get; this one does a great job capturing the moment.”

She also received second place for an entry of the Bear Creek Lake State Park photo gallery that was placed on The Herald's website.

Harris also received honorable mention awards for an On Megan's Mind entry under the specialty of informational and for her front page photo that captured Cumberland County Public Schools' first day of the new school year.

Her first place in photography for news photo focused on an old grain mill in Buckingham Court House. The photo accompanied an article on the mill, Flour Power: All You Need Is Loaves.

“Great composition, telling the tale of the ravages of time without words,” offered the judge.

Knott received a second place award in the same category for a photo she took at the groundbreaking ceremony for the St. Thomas Aquinas Seminary. The photo featured the Reverend Father Yves le Roux tossing a shovel full of soil toward the camera. “A nice action shot that would be great in 3-D,” wrote the judge.

Two news stories, submitted as one entry, on the seminary's groundbreaking, also earned Knott a third place in news reporting. The judge stated, “Nice job Tana – a lot of good things happening in your community. You have a nice way of showcasing that.”

Photographs and an accompanying article on Impact Virginia, a youth mission program offered by the Virginia Baptist Mission Board, garnered Knott a third place in the photographer-writer category. Building Faith On The Top Of A Roof featured a weeklong effort of home repairs and renovations by the teens and their leaders.

Columns/humorous received a first place for Down the Back Road entries, “Maternity Leave and 'Surro-goat' Moms” and “Ho-Ho-Halloween.” The judge commented, “The goat story has substance – it's more than a personal story. Information and history on goats make this a sound piece. Very enjoyable.”

Second-place awards included news reporting for A Cut Above the Rest, a story on Angus Wall's Academy Award for film editing, and Home At Last, detailing a community effort to build a home for an octogenarian couple living in a dilapidated trailer. The Tastefully Speaking food column also received second place, as did two more Down the Back Road columns in the personal opinion category, “Raptor Rescue” and The Night Before Christmas. The judge commented, “Really enjoyed the piece on the hawk – provided valuable insight while still relaying a sweet story.”

Third place was awarded in the category of special articles/physical health, for Local Cancer Study Initiated, a feature on a two-year project headed by Justine Young to study the high cancer rate in the Piedmont Health District, and Local Mission Team Travels To Africa, an update on Dr. Donkor's clinic in Ghana and a local mission team who helped build the maternity ward.

Honorable mention was awarded in special articles/hobby or craft for The Toymaker's Son, a review of Frances Wood's latest book, and Quilter Thanks Firefighters, a feature on Judie Phelan's donation of four quilts to the fire departments who responded to the fire that destroyed her home; special articles/social issues for A Friend Indeed, a feature about longtime friends Bob Walsh and Vilma “Pete” Woodard; From Habitat To Home, the mortgage-burning celebration of Habitat homeowners Roy and Cindy Davis; and feature photo for “By Dawn's Early Light,” an early bird's view of a frozen winter morning.