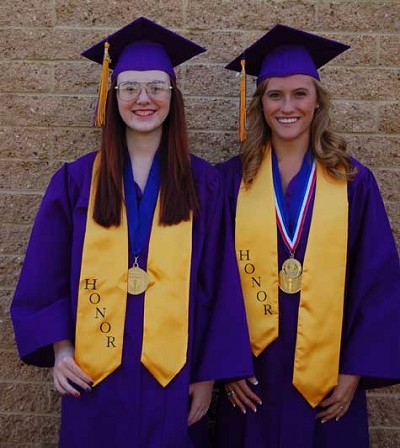 PRINCE EDWARD – He's a 1978 Prince Edward County High School graduate and the director of the Moton Museum, but Lacy Ward Jr. reached a little further back than his own history to offer advice to the Class of 2012.

To the book of Joshua.

“Joshua came into leadership in the shadow of a great man,” Ward said Saturday morning with parents, family and guests looking on in the middle school gym. “The challenge was great. Expectations were high. Would he be prepared?

Ward, who moved from Philadelphia 40 years ago to Five Forks in Prospect, reflected that he attended what was then Farmville Elementary School (what today is known as the Robert Russa Moton Museum).

“Not all of Prince Edward County's students in the past were, however, afforded the educational opportunities which prepare them for positions of leadership,” Ward detailed. “You see, their home county, our county, for an extended period denied them an education at public expense.”

Ward reflected on one such student, a seventh grade classmate, who was 17-years-old “her life forever scared by the five-year closing of the Prince Edward County Public Schools. She did not advance with her classmates to the eighth grade at Prince Edward County High School-yes, we had a sub-freshman class then, quite a number of us crowded into that school building-for her education ended at age 18 with only seven years of schooling completed.”

He added, “I grieve for her every day and for those similarly affected by the closing of the schools.”

Still, Ward added, he thanks her for “what she did for me” and noted that “she afforded me an up-close and personal introduction to the Civil Rights Era saga of Prince Edward County, Virginia 1951-64.”

As a twelfth grade government class, he further reflected, they read Bob Smith's They Closed Their Schools and watched Encyclopedia Britannica's Equality Under the Law: the Lost Generation of Prince Edward County.

“Today, sharing with others across the nation what I learned about that era in County school history is my career. Sharing my classmate's story and those of the approximately 4,000 other locked-out students is the reason I go to work everyday.”

Ward offered that, at times when he has looked for inspiration in his life, he has often looked to the Word and encouraged graduates to look to the Book of Joshua.

“For today is your Joshua Moment,” he told them.

Ward noted, “From the time of one of its earliest students, Robert Moton, of Rice, who went on to become president of Tuskegee Institute and the father of Tuskegee Aviation, to former Hampden-Sydney College president Samuel Wilson, also of Rice, to Civil Rights leader Barbara Johns, of Darlington Heights, to today, the Prince Edward County Public Schools have produced great leaders.”

He added, “Class of 2012, you graduate in the shadow of these great leaders, nurtured in this community, leaders who lead the Prince Edward County Public Schools out of the bondage of segregation and into the promised land of equal opportunity.”

One of the leaders, a former student, Ward reflected, is memorialized in bronze on the grounds of the Virginia State Capital. The state's Civil Rights Memorial, unveiled in 2008, he detailed, immortalizes on one side student Barbara Rose Johns while other facades immortalize adult mentor Rev. L. Francis Griffin and students' attorneys Oliver Hill and Spotswood Robinson.

“Johns, Griffin, Hill and Robinson made a difference,” Ward offered. “They brought us out of Jim Crow, yet their work is not done. And continuation of that work falls to you, the Class of 2012. Today is your Joshua Moment.”

They may not feel fully prepared for this moment, Ward said, “But trust me, you are. The parents, teachers, mentors and others assembled here today have given you all the tools you need to assume your new role as adults. You may fear the moment. Do not. Shun fear. Embrace action. You are prepared.”

Ward commented, “Later in her life when describing the student strike she led, the strike which led to Brown v. Board of Education, Johns remarked, 'There wasn't any fear, I just said 'This is your moment, seize it.'”

He encouraged, “Like Johns in her moment, today is your Joshua moment. Seize it..”

Ward added, “…Be strong and of a good courage; be not afraid, neither be thou dismayed: for the Lord they God will go thee whithersoever thou goest. Go forth and soar like eagles.”

Katrina Lowe, class valedictorian, “No one ever told us that high school would be easy. No one ever said that reaching this point in our lives would be as difficult of a journey as it was, yet hard work, determination, and perseverance kept us moving forward with each passing day. Though the path was not easy to walk, we had hands guiding us through every step of the way-our parents, our family and our teachers led us through the most challenging times of the past 13 years.

She also noted that the memories of the class they will leave here with are unique and encouraged them to “remember where you came from” reflecting on the loving guidance of parents, the support from their teachers and the classmates that surrounded them.

“Some of us will be going into the military, others going to college, and some getting a job,” Ms. Lowe said. “But as we part from our last day altogether, I challenge you to use what you've learned to better yourselves. Begin to make good choices as adults in today's society. Push yourself even harder to find what you want in life. And if you get knocked down from time to time get right back up.”

Class Salutatorian Calla Bowles advised, “…It sometimes may be easy to consider ourselves in terms of the expectations of others and the perceptions of who we are or who we should be. But I would like challenge each one of the class of 2012 to always express the best parts of your character, intelligence and talents in the most honest way as possible. Only in being true to our own hopes and dreams will we find real happiness.”

Graduate Kanisha Nash who gave a heart-felt and, at times, emotional performance of Can't Give Up Now.

There were also words of wisdom and encouragement from other school officials as well.

“Today, we celebrate the conclusion of this phenomenal group of young people. This graduating class has exemplified excellence in several ways,” cited Principal Craig Reed. “Throughout the 2011-12 school year, this senior class has modeled leadership not only in their behavior, but their attitudes.”

Principal Reed noted that the graduating class contributed to the school the class' enhancement of the senior eating area and, as a result “have proven that hard work, positive attitudes and giving to others has its rewards.”

He noted that the class accumulated over $400,000 in scholarship money.

“Indeed, this senior class represents the continuous transformation of our school and they have set a new standard of excellence for other senior classes at our school,” Reed said.

School Board Chairman Russell Dove offered greetings on behalf of the school board “and welcome you as we prepare to release another flock of our eagles.”

He also offered, “…Class of 2012, I know you're excited about today as you should be. But for many that excitement is shared with some degree of concern about your tomorrow. You are graduating at a time that many are calling challenging, but in my opinion that is only half true. I will admit that in the past 12 years, we have witnessed some shocking events, but in spite of those events, we remain devoted to protecting our freedoms and our values. And, from that commitment, many new opportunities were born.”

Dove would also offer to the class that they have been given the tools to be critical thinkers “and I'm sure that with your imagination, we'll rise to create solutions to some of our future challenges. Therefore today, I challenge you to follow your dreams and seek out future opportunities. But also today, I encourage you to celebrate this achievement and enjoy this moment.”

“You are here today because of your success and your struggles and your growth,” Division Superintendent Dr. David Smith also said. “It's been a team effort and you are a key player, but not the only player. Your teachers, school staff members, parents, family members and your community are essential members of the team that has ensured your successful completion of your high school career. This room today is filled with your team members.”

The superintendent encouraged the seniors to show their appreciation with a round of applause.

“Treasure these relationships and nurture them,” Dr. Smith also advised. “They will serve you well all of your life. In response, help show your gratitude by guiding and supporting others as we all move along our life journey together.”

'See You When I See You'

CUMBERLAND – Cumberland High School's commencement for the Class of 2012 was on Friday, May 18. Cumberland County Public Schools... read more