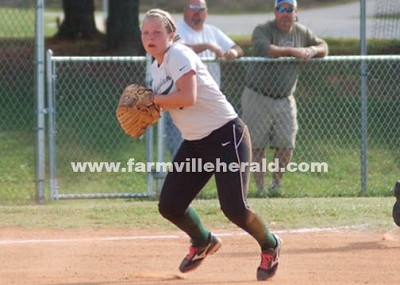 The Buckingham County High School softball team saw its season come to an end with a 6-0 loss to Central of Lunenburg on Monday afternoon in the quarterfinals of the James River District Tournament.

Playing as the No. 3 seed, Buckingham gave up two runs in the first and three in the second to dig an early hole – one they couldn't climb out of against the Chargers, who backed up solid pitching with almost mistake-free defense.

“We had three hits on the afternoon, and Chelsea Shumaker had two of them,” said BCHS head coach Krissy Stearrett. “We couldn't get anything going offensively, and defensively, we made some crucial errors that helped them, especially early on. Of the six runs we gave up, five were unearned.”

Buckingham freshman Kristen Jamerson helped to stop further damage in the second inning with stops on two hard shots to the hot corner. She also helped Buckingham to an easy defensive inning in the bottom of the third, by snagging a line-drive, and quickly throwing over to first to record an inning-ending double play.

Buckingham's best offensive chance came in the top of the fourth. Shumaker singled to lead off the inning, and Savannah Gough raced down to first base to beat the throw on a base hit. Both runners were able to move around to second and third, but the Knights' hopes for a big inning were dashed with three straight strikeouts. The rise ball gave the Knights trouble all afternoon.

“Those are some of the kinks we're going to have to work out in the offseason,” said Stearrett. “We really had trouble hitting well all year, with the exception of a couple of games.”

Buckingham had just three seniors on the roster – with one being Elynn Lee, who was injured just before the season began. All three (Shumaker and Sierra Coleman) battled injuries at some point in the season.

“That hurt, because you have to switch players around into positions they aren't familiar with. It's hard, because you really don't want to make excuses. Everyone has to deal with injuries during the season, but with three seniors and two juniors, we were already young, so it certainly didn't help us.”

Maybe not in the short term, but Stearrett sees that the experience gained by the five sophomores and two freshmen on the roster paying off down the road.

“As long as we keep working and improving, it will be good for us, but we have to keep at it, and improve in all facets, hitting, pitching and fielding. All three have to be good to get back where we've been the last seven years. You can't get by with just two of the three.”

The Fuqua School softball team finished its 2012 campaign with a strong finish that ended in the semifinals of the... read more