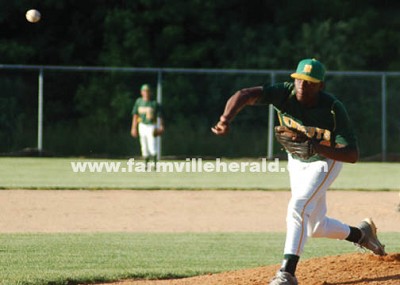 It must be May.

The Buckingham County High School baseball team is managing to play its best ball of the season, and after a defeat of Goochland (5-4) and a win over Bluestone on Thursday (2-1), the Knights upended No. 4 seed Central of Lunenburg in the James River District Tournament quarterfinals on Monday afternoon in Victoria.

The fifth-seeded Knights were scheduled to face top seed Goochland on Wednesday at 5 p.m. in the semifinals, after Goochland easily dispatched of No. 8 Cumberland 7-0.

Senior Tarian Ayers, who closed out the regular season on Thursday with a complete-game two-hit effort against Bluestone, was just as sharp on Monday afternoon at Central.

He pitched his second complete game victory in four days, and on both occasions looked to get stronger and stronger as the game wore on. Not bad for the senior, who signed a National Letter of Intent to play football at Virginia Military Institute back in January. Very good for an athlete that hadn't played baseball since he was middle school aged.

“Tarian is throwing strikes right now, and when he does that, it makes it a lot easier to play defense,” said Jones. “That gives us that many more options from game to game.”

Against Bluestone last Thursday, Buckingham trailed the Barons 1-0 after the first inning, but the Knights scored both of their runs in the bottom of the fourth to take the lead for good.

Jesse Hickman scored on a double by Justin Smith, who scored on an RBI single by Cody Herndon. That was all the offense Ayers needed, as the senior allowed just two hits and struck out 11 Bluestone batters.

Ayers again fell behind 1-0 after the first inning in Monday's game at Central. The Knights didn't waste any time in tying the game, nor did they waste much time in taking the lead.

John Edwards sharply singled with two out in the top of the second and scored on a RBI double by Justin Baird. Hickman gave Buckingham the lead with a solo home run that easily cleared the fence in right field.

Two Buckingham fielding errors allowed Central to tie the game in the bottom of the fourth, but Dylan Davis scored after singling to lead off the top of the fifth, that gave the Knights the lead for good.

Buckingham took control of the game in the top of the sixth. Baird singled and scored on a double by Davis. He scored, as did Cam Johnson and Hickman to give BCHS a comfortable lead.

Ayers and the BCHS defense retired the final six Central batters in order to get the win and move on in the JRD Tournament.

Now, Buckingham continues to fight for its tournament life against a Goochland team that still has its loss to the Knights fresh on its mind.

“We've seen them twice and have seen the same pitcher twice,” said Jones. “We played well down there last week, but I can imagine they won't be overlooking us, and they'll be motivated a little more.

“We've got to stay focused and remain ready to play both mentally as well as physically. They'll have a chip on their shoulders, but we know we can beat those guys, so there is no reason we should go in there lacking confidence.”

The Buckingham County High School soccer team came up just a little short in its bid for its second-consecutive James... read more