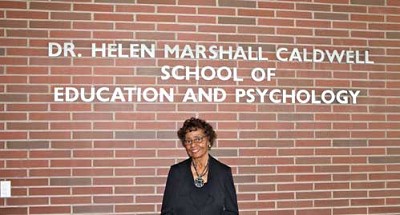 When Dr. Helen Marshall Caldwell graduated from the Cumberland County Training School in 1944 she knew that her life would be dedicated to teaching. Dr. Caldwell's career in education led to another dedication on March 10 when Elizabeth City State University named one of four academic schools of study in her honor.

“I have not come out of the clouds from it yet,” ECSU's honoree commented.

Dr. Caldwell, who started her career at ECSU in 1953, served with distinction in each faculty rank, from instructor to full professor with tenure in the Department of Language, Literature, and Communication. She was also the first woman to serve as ECSU's Vice Chancellor for Academic Affairs, a position she held for nine years.

Dr. Caldwell's career in education began after her graduation for Virginia State University. She had a bachelor's degree in English, and she was ready to teach.

“Mr. McIlwaine was the superintendent of schools in Prince Edward then,” she recalled. “I was right out of college, so my father went to see him to see if he would let me come in for an interview.”

The Marshall family, Edward L. and Annie Randolph Marshall and nine children, lived on a farm in Cumberland County.

“My father was a good farmer,” Dr. Caldwell related. “He not only owned his own land and farming equipment, he continued to buy land.”

Getting an education, Dr. Caldwell recalled, was not an option in the Marshall household.

“My parents always stressed the importance of education, and they insisted we get an education,” Dr. Caldwell said. “All of us went to college or had some type of training – some were nurses. My parents were very supportive, offering encouragement for good grades.”

Her brother and only surviving sibling, Harry Marshall, still lives in Cumberland and has recently started renovating the family home place. Along with his son, Dr. Harry Marshall Jr., and Louden V. Marshall, the Marshalls operate Springview Farms specializing in Angus beef.

“Farmville is still very much in my heart,” Dr. Caldwell noted.

As a young teacher, Dr. Caldwell was a part of the events that shaped the history of Farmville as well as the nation.

“After my father talked to Mr. McIlwaine I had an interview, and I got my first job teaching at the Moton High School,” she recalled.

Dr. Caldwell clearly remembers the April morning in 1951 when Barbara Johns came to her classroom.

“Barbara, who was in my homeroom class, came to see me and said that they were going to have a student assembly that morning,” Dr. Caldwell recalled. “I told her, that will be fine – I'll come and listen.”

Barbara, Dr. Caldwell explained, was one of the student leaders.

“Barbara said – 'Oh, no, Miss Marshall, you can't do that. The teachers are not permitted.' So I just smiled and sat down. I figured I had another hour of doing what I was doing in preparation for class. I thought that the students were planning something for the teachers – which, as students, they did. They were a very innovative group.”

“Barbara, of course, didn't come back that day because the students went on to march,” Dr. Caldwell continued. “That was how it started.”

It was also the start of a new direction in Dr. Caldwell's career.

“That event guided my life,” she stated. “If those events hadn't occurred I probably never would have left Farmville. Since I didn't have a job I decided to go to graduate school.”

She applied to NYU to pursue her master's degree.

“At that time at NYU, one had to do an interview to be admitted to the university itself,” she explained. “A speech pathologist who taught at NYU did the interview and took an interest. She said, 'Why don't you come and let us talk to you?' So instead of going to the panel that would have interviewed me for the English master's degree I went there. I liked the possibilities of what you could do with speech pathology and audiology.”

While at NYU, Dr. Caldwell completed her master's degree in just nine months.

“Which I've said no one should ever do,” she said with a laugh. “But I liked a challenge. The university told me they had a master's program set up for nine months but didn't advocate people going into it. My question was – why does the university have it if they don't think it's a good program?”

“They told me, it was very taxing,” Dr. Caldwell recalled. “I can still hear those words.”

Dr. Caldwell went on to get a doctorate in Higher Education Administration with a cognate in Speech Pathology and Audiology from George Washington University. She is also a certified speech pathologist.

“I was born in a small town and like small town people,” she explained her choice. “I had also met someone from Elizabeth City.”

While teaching was always her first love, Dr. Caldwell embraced the position of Vice Chancellor for Academic Affairs with typical enthusiasm. Under her leadership many of the university's premier programs were developed and added to the curriculum. Mathematics and art education were instituted as degree granting programs; majors in marine environmental science, economics, social work, aviation and biology were submitted to General Administration, leading to the university's offering of the first graduate degrees; the Weekend/Evening Program was planned and instituted, allowing services to the first large population of non-traditional students.

While Dr. Caldwell has received numerous awards during her career she is especially pleased with Governor James B. Hunt's conferral of the Order of the Long Leaf Pine, the highest order bestowed on outstanding citizens in North Carolina.

“It's a very coveted award,” she noted. “That touched me a great deal, but not like having the students that I taught initiate the process to name the building on the ECSU campus for me. This is the first time that students have initiated this process.”

“For any dedicated teacher this would have to be the signature award,” she added.

Dr. Caldwell's signature remains with her former students who nominated her for the honor.

“Teaching impacts lives,” she reflected on her career in education. “You can see it almost immediately because you recognize talent when you meet it. The students don't know it – it takes years for them to fully realize all that they are. But if you care about them and teach them you can help to guide them there. It's really just wonderful.”

“How can anyone teach if they don't love it?” Dr. Caldwell concluded. “How can you do something all your life that you don't have a passion for? Teaching is what I always wanted to do.”

The Dr. Helen Marshall Caldwell School of Education and Psychology at ECSU stands as a testimony to the students whose lives she has touched.

PRINCE EDWARD – The Piedmont Regional Jail is the only jail in the state that does not receive funding from... read more