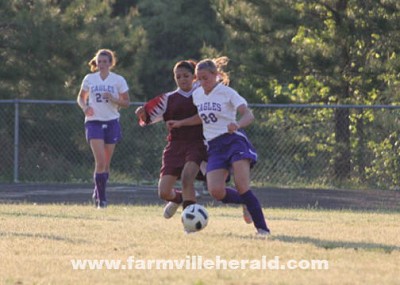 Note: The following is a weekly update produced by Prince Edward County High School Athletics Department for the Farmville Herald.

The PECHS boys team finished fifth out of the 22 teams represented. Leading the way for the PE boys was senior Rashaad Walton, who was named the meet's outstanding male runner.

Pashion Banks led the girls team with an eighth-place in the triple jump with a personal best leap of 33 feet, 1.25 inches. She also set a personal best of 15 feet, two inches in the long jump.

Delantra Nash competed in the long and triple jump, in additiom to the 100 and 200 meter sprints.

Shantiaya Lewis and Katrina Jones participated in the shot put and discus.

The PECHS girls soccer team defeated Park View in its first Southside District contest with a 4-2 victory over the Lady Dragons in South Hill.

After a rough start, the Lady Eagles got on the board on a penalty kick by Lauren Keup. Later, PE scored again on a goal by Katrina Lowe, on assists by Keup and Kim Jones.

Ahead 2-1, Amie Dews scored twice to help the Lady Eagles to the two-goal victory.

Prince Edward Boys Soccer team posted two losses on the week, with a 5-2 setback at Southside District member Park View, and a 1-0 defeat to Nottoway.

On Monday night, PECHS goalie AJ Stringfellow was tested early with a close-range save in the second minute on a ball that hit off the crossbar and into his hands.

Park View again had a good chance at a score turned away by the crossbar on a free kick in the tenth minute.

The Eagles managed to score first. Bryce Deitrich got the ball on a pass from DaQuan Johnson and took a 30 yard shot to the far post to beat the Park View keeper.

The Dragons tied the match at 1-1 about ten minutes before intermission, and extended its advantage in the second period. The Dragons scored in the 45th, 59th and 68th minutes to take a 4-1 lead, before Bryan Allen put the ball in the net with about five minutes remaining. He scored on a low shot aimed at the near post. Two minutes later, Chris James narrowly missed a shot to pull PE to within a goal, but Park View put the game well out of reach with a late goal.

On Friday, the Eagles, which had won the first meeting between the two clubs, started quickly. Bryce Deitrich's shot just minutes into the contest showed the intensity the Eagles would play with most of the night.

Effort doesn't always equal execution. Nottoway also produced a couple of good scoring plays, only to be turned away by the cross bar or Stringfellow, who pulled in two saves in the 34th and 38th minutes.

Allen's shot in the 30th minute, and one by Chris James minutes later, came up empty in what was a scoreless contest at the intermission.

It was more of the same in the second half, with both teams exchanging scoring opportunities, before Nottoway was able to sneak a shot in past Stringfellow in the final minute of regulation on a low shot in the far corner of the net.

In what proved to be a battle of two evenly-matched squads, the match would end in a 4-4 tie.

Fuqua took a 1-0 lead on a well-executed corner kick that found the goal on the far post.

Colton Sheehan tied the game at one goal apiece after seven minutes of play in the second half.

Three minutes later, the Eagles capitalized on a string of good passes to go ahead 2-1. Niko Reinson fed Rafael Dimaano who scored with a shot over the keeper in the far corner.

A minute later, Colton's shot meets the crossbar and bounces out. Sheehan scored his second goal after several passes from side to side.

FARMVILLE – Sometimes a game has to be won twice. At least that was the case for the Prince Edward... read more