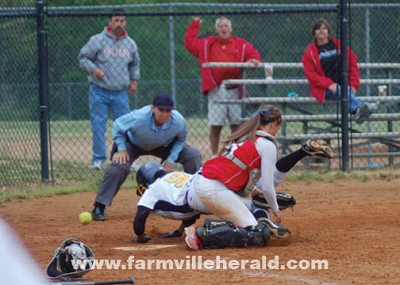 FARMVILLE – Sometimes a game has to be won twice. At least that was the case for the Prince Edward County High School softball team on Thursday in its 6-5 victory over Southampton.

With two out and Etephanie Luperon on second base, Quante Bowles lined a sharp single into shallow right field that gave Luperon just enough time to beat the play at the plate to give the Lady Eagles (7-4, 3-1 SSD) the one run victory.

Since only the top two teams will advance to the Region I Playoffs following a triple round-robin schedule (no district tournament will be held), Thursday's victory was a much needed must win for Prince Edward.

“I'm just really proud of the way we played,” said PECHS head coach Marvin Meadows. “We beat a good, solid team today. They can hit. Casey [Meadows] did a good job [pitching] and we got the hits when we needed them. I feel this is the best team that we've played this year. I know it's the best team we've beaten.”

The seventh-inning became necessary after Prince Edward was unable to break a 5-5 tie in the bottom half of the sixth.

The Lady Eagles had help.

With one out and freshman Lindsay LeSueur – who hit a two-run home run earlier in the game – on second base, it looked like Casey Meadows had doubled in the go-ahead run. The line drive hit off the glove of the Southampton first base player (who was playing in front of the base) and into foul territory. It was ruled a foul ball.

After Meadows walked, sophomore Elizabeth Reed hit a soft blooper that fell just in front of the Southampton shortstop.

Though the ball never really had much of a trajectory to it, the base umpire ruled as an infield fly, which meant Reed was automatically out. In the confusion LeSueur was caught off base, resulting in an inning-ending double play.

After much discussion, the Lady Eagles quickly put the incidents behind them and were able to retire Southampton in order in the top of the seventh.

“After all that, we went out and made two great plays in the infield,” said Marvin Meadows. “Those were big stops. If they were another two or three feet either way, or if their heads weren't fully in the game, we're looking at runners on base with no out.

“They never got down. They never stopped playing.”

Since losing to Park View on March 29, the Lady Eagles have won four straight ball games, and have put themselves in solid contention for one of the two Region I Playoff berths.

“We've been working hard on drills. Especially on bunt coverage,” said Marvin Meadows. “I was reading about a drill over the break, and we've been working on it all week. They don't like when I read about softball drills.

“I think we're gelling. We haven't gelled. We have too many things to work on, but I do feel that we are making progress.”

Just in time, as the Lady Eagles were scheduled to travel to Park View in another key SSD showdown on Tuesday afternoon, and will travel to Brunswick on Thursday. This weeks games will mark the first two of four games away from Poulston Field.

Falcons Rally To Win Over Vikings

FARMVILLE – Facing an early one-goal deficit and a defensive scheme that had at least four players in its own... read more