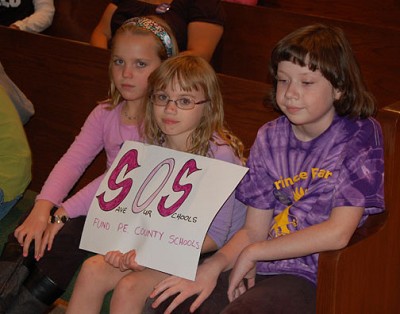 PRINCE EDWARD – Despite calls at last week's public hearing for supervisors to consider a tax increase to aid in funding the county's schools, there appears no move to do so.

Speaker after speaker at the budget public hearing last week offered to pay more in taxes if it would help the County's schools. Tuesday's board of supervisors work session, with parents and children in attendance-some youngsters even holding signs-netted some board discussion, but no motion to re-advertise a budget that includes a tax hike.

“Last week, when the parents came in, the teachers, priest and everyone came in, they made it clear that they want us to fund their schools even if it means that the taxes needed to go up,” reflected Farmville District (801) Supervisor Pattie Cooper-Jones. “And, if that's what it takes, those little babies out there deserve an education, deserve to have all the necessary thing(s) it takes to get them to be fruitful bearers of prosperity. If it takes us changing the tax rates, then I'm not opposed to it if it's gonna fund our school children.”

She would later offer that “the children are our future. If we put nothing in, we're gonna get nothing out.”

County supervisors, in advertising the budget, did not include an increase in the real estate or personal property tax rates. To do so now would require that the board re-advertise and hold another hearing just to consider it. An advertised tax rate can go down after a public hearing, but cannot increase without supervisors first holding another public hearing.

“My district is such, I can't support a tax rate (increase),” he said. “I just can't do it. When I look at the list of the taxpayers that are having problems, I see the names of the people on there. I know 'em. To add more to it sets up something they just can't get through. They just can't do it.”

Gantt added, “I'll work with you a hundred ways to get the funds to the schools that need to be there. That's not one right now in this economy.”

Added Hampden District Supervisor Charles McKay, “I have heard people say if the taxes are increased they'll have to lose their homes. And I'm not in favor of a tax increase, especially this year because…people already are having trouble paying their taxes.”

McKay cited there would a town hall meeting with State Senator Tom Garrett at 7 p.m. on Thursday, April 26 at Hampden-Sydney's Crawley Forum.

“Please go and speak up…Let them know that you support the schools,” he said.

Added Prospect Supervisor Howard “Pete” Campbell, “The state is the one that mandates this stuff and then doesn't give us the money to do…what we need to do.”

Vice Chairman Howard Simpson also offered that the state is the one cutting the school budget, offering that the County is giving $416,000 more than last year. (Last year's budget included funding for a one-time bonus for school workers, which is included in the County's budget plans, as well as the difference created with the reduction in debt service.)

He also noted, “I think, personally, that the school…will be fine for the next coming year. I know you might have to make some changes, but…we have to make changes ourself here with the County and all.”

The proposed budget anticipates an increase in local tax revenues of approximately $454,000, which it was previously cited is mainly due to the increase in number and value of motor vehicles in the county; a 3.6 percent cost of living increase for county employees, mirroring Social Security's COLA increase in January and would be the first increase for workers since 2007; level or decreased funding for most county departments, constitutional offices and county emergency services agencies; and $8.1 million of local funds for the schools.

School officials are facing deep state cuts, declining enrollment over recent years, and a change in the state's composite index, are looking at hefty cuts for the coming year.

At the time the school budget was sent to supervisors, the school division faced a net budget shortfall approaching $2 million when measured with the governor's proposed budget and factored an Average Daily Membership (ADM) of 2,270 students.

The school board's proposed budget totals $26,132,027 and seeks local operating funds totaling $8,130,379 plus $572,397 in debt service funds. (The food service budget, which is separate and self-sufficient, was also recommended with no change from the previous year, or $1,087,070.) They also asked, however, for $785,334 more in local funding while holding to a contingency list of priority ranked cuts.

A list of Level I reductions built into the schools request total $1,182,289 factors a range of cuts including positions and programs.

Even with that, it was projected it would still leave them short, which leads to a Level II prioritized list that factors $787,310 more in cut options.

The good news is that figure (with General Assembly's conference budget) is expected to be reduced, leaving school officials to trim about $465,000.

The bad news, however, is that they will apparently still have to look to the Level II list for those further reductions. That list includes possibly cutting a division gifted resource teacher ($64,980), a position that has been advertised this year but not filled; middle school special education teacher ($64,980); transferring middle school teacher to be funded with grant monies ($64,980); elementary computer teacher ($64,980), shifting the individual to a currently vacant ITRT position at the elementary school and possibly being able to help with the computers and teachers and support for students while covering the ITRT position; high school German teaching position ($64,980); an additional elementary teaching position ($64,980), which could not be in first-third grades to maintain classroom ratios tied to state funding; combining the agriculture/horticulture position ($64,980); reducing an art teacher position at the high school to half-time ($32,490); a band teacher position ($64,980) – so there would be one teacher to cover both the middle and high schools; and eliminating a proposed one percent salary increase.

Supervisors opted in the work session to include some additions to the budget. As the county administrator had recommended, the proposed budget pencils in $63,604 for the changes in the Virginia Retirement System (VRS). (In both the House and State Senate budget bills that the state is mandating local government employees begin paying five percent of the cost of the VRS rate and the additional funds and, with a pay adjustment of 5.7 percent that keeps the employee at the same level of take home pay.)

Other recommended changes include $5,000 for the Farmville Area Bus line to help defray the increasing cost of fuel; $800 for Special Olympics, a reduction of $3,160 to the Piedmont Soil and Water Conservation District (with the district not receiving an anticipated cut); $2,750 more for Madeline's House, and $10,003 for the Health Department.

Supervisors by consensus also opted to include an additional $5,597 for the regional library.

Gantt, in looking at several budget costs, reopened the discussion of health care. Earlier in the month, supervisors agreed to keep the current health care plan for employees (with Gantt dissenting). He favored moving from a $100 to a $200 deductible (and possibly a $100 increase for workers to take care of the deductible). That could potentially afford some savings for the County and, while-after some discussion-there was a motion to revisit the matter, it again failed.

Supervisors are still looking at the potential of having a self-insurance plan with the school system.

Board members also discussed publishing the list of the names of those three or more years delinquent in paying personal property and real estate taxes. County officials are expected to talk with the County treasurer.

“…We're in hard times right now and I don't want to penalize anybody or embarrass anybody that's on a short-term situation, but three years to me is-it's time you need to do something,” commented Farmville District (701) Supervisor Jim Wilck.