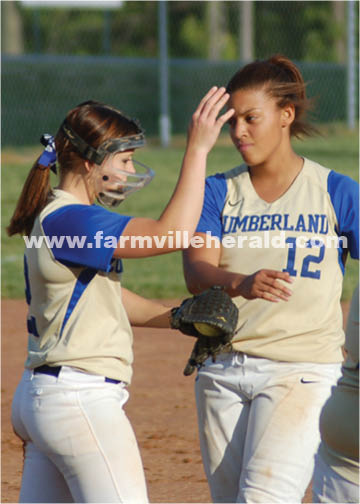 CUMBERLAND – It had been a while since the Cumberland High School softball program was staring at the prospects of a four-game win streak.

However, Tuesday afternoon's opponent, Randolph-Henry, was having nothing of the suddenly red-hot Lady Dukes in a 6-1 victory by the Lady Statesmen.

Cumberland's impatience at the plate played a major role in its first setback since April 3. In that span, the Lady Dukes posted victories over Buckingham, Amelia and Nottoway.

“We didn't make them work enough,” said CHS head coach Travis Gilliam. “Our lack of patience at the plate really showed, and it cost us.”

Though Cumberland put runners on base in every inning but the third, the Lady Dukes were unable to sustain anything offensively.

Some of the credit goes to R-H sophomore pitcher Morgan Foster, who had an efficient afternoon with an 82 pitch outing.

Cumberland managed just one walk in the contest, and only one other time did a CHS player work her way into a full count.

“We've improved in a lot of ways as the season has gone on,” said Gilliam, “but we've got to do a better job of working counts to our advantage. [Foster] threw a little under 12 pitches an inning.”

Cumberland got on the board in the bottom of the sixth. Kamren Gilliam tripled after lining a ball off the center field fence. A Breanna Davis sacrifice fly to left field scored Gilliam.

Down to their last strike in the bottom of the seventh, No. 9 hitter Kayla Morrison singled and moved to second on a wild pitch. Leadoff hitter Quinn Duty walked, but the potential rally was cut short on a pop fly to the shortstop.

“We had a 2-0 count with two runners on, and with the heart of our lineup coming up,” said Gilliam. “That's a situation where I'd like to see us take a pitch. We've got to be more aware of the situation and make the correct plays, both offensively and defensively.”

Junior pitcher Quinn Duty had a solid afternoon in the circle. She allowed six runs on seven hits, walked six and struck out six.

Foster allowed one run on five hits, struck out six and walked one.

Gilliam led Cumberland with a 2-3 performance that included a triple and a run scored. MacKenzie Parker was 2-3.

Randolph-Henry was led by Briana Shelton, who was 1-2 with a walk and three runs batted in.

Though frustrated at the afternoon, Gilliam was quick to point out that he couldn't be happier about the progress his team has made since the beginning of the year.

“We've got to continue to improve, as we're now into a stretch of games against the top teams in the district. We'd like to be able to get a couple more victories to improve our seeding in the district tournament. And who knows, with the split division format, we may be able to get a regional tournament berth, but we've got to improve as much from here on out as we have improved from the start of the season to now.”

Cumberland's scheduled game at Central of Lunenburg for Thursday afternoon was postponed to Friday due to the weather that moved through the area on Thursday morning.

Afterward, the Lady Dukes will host Bluestone on Tuesday and then travel to Goochland next Thursday.