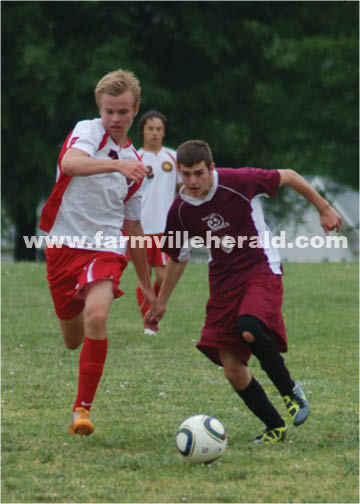 Falcons Rally To Win Over Vikings

FARMVILLE – Facing an early one-goal deficit and a defensive scheme that had at least four players in its own penalty box at almost all times, the Fuqua School Falcons had to use their heads to rally past visiting Brunswick Academy on Wednesday afternoon.

Two successful headers off of corner kicks late in the second half helped the Fuqua soccer team rally for a 2-1 victory.

On both scoring plays, four or five Fuqua players stormed into the box just as the corner kick bent around in front of the goal.

“We work on that play all the time in practice, and we haven't scored on it all year,” said FS head coach Alex Spirn. “But it worked today. Twice.”

Fuqua (3-5, 3-3 VCC) controlled possession for most of the afternoon, but frustration began to mount as several missed opportunities piled up.

“A couple of times we started to get out of control,” said Sprin. “We just needed to relax, back off and regain our composure. I had to sub in a few guys, because sometimes when you get into a situation where the ball isn't going in, you feel you want to take the game over and do it yourself. It doesn't work that way.

Toward the end of the game, you could see them start to play more as a team. As a result, our scoring changes went up and we started to take better shots.”

It hasn't been the best of starts for a Fuqua team that had high expectations entering the 2012 season, but Wednesday's victory was the second-straight win for the Falcons.

“It's been rough,” said Spirn of the season up until this week. “I am starting to see things come together. I think we're on the right track.”

Fuqua will host Blessed Sacrament-Huguenot on Monday, and will travel to Kenston Forest on Wednesday. The Falcons lost to BS-H 5-2, and were edged by the Kavaliers 4-3 earlier in the season.