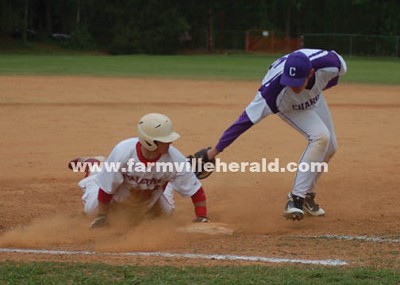 FARMVILLE – With most schools in the area on Spring Break this week, the sports calendar is light for those teams that do play this week. Central of Lunenburg and host Fuqua School probably don't feel that way any more, as the two non-conference opponents needed 12 innings to decide Wednesday's contest at Gilmer Field – a 5-4 victory for the Falcons.

An intentional walk issued to Carter Cunningham loaded the bases with one out. Against a Central infield that was playing at normal depth, Fuqua School junior Andrew Ware slapped a bunt about ten feet in front of the plate.

That was enough time for FS sophomore speedster Antonio Gonzalez, who singled and was then moved to third on a ground-rule double by Landon Allen, to sprint home to score the winning run on the squeeze play – just as the throw back from the pitcher to the plate ricochetted off the catcher's glove.

“We were in a good situation, and I'm just glad it worked out,” said FS head coach Ted Cunningham. “Pooh [Gonzalez] came up with a clutch hit in his previous turn at the plate, and he did again in that inning, and we were finally able to take advantage of it.”

Gonzalez led off the bottom of the tenth with a sharp single back up the middle, but after junior Jai Jamerson and Ware drew walks to load the bases, Fuqua's bats were unable to capitalize on the opportunity.

Cunningham pointed out that usually when teams fail to cash in on chances like that, they rarely get another opportunity.

“Davis [Cyrus] was clutch for us on the mound,” Cunningham said of the junior who entered the game in the sixth inning and eventually recorded the victory. “We had hoped to use him only an inning or two, and then have him for our game at Miller School on Friday, but we had to ride him for what's basically another game, but he was shutting them down. These games may not be as important as our league games, but they are in terms of our state standing.”

Lunenburg took a 4-1 lead in the second inning against Jamerson, who drew the start on the mound. After that dust-up, Jamerson was able to keep the Chargers from extending their lead.

“He had a couple of bad innings, but once he settled down, he did quite well,” said Cunningham. “Central came in here ready to play. I'm not sure we were of the same mind-set at first, but once we figured out that we were facing a talented team, we woke up a little and played well enough to win, which really, they did, too.”

Fuqua (6-1) trailed 4-1 until the bottom of the fifth. Josh Davis, Gonzalez and Jaimerson drew successive walks to load the bases with just one out. A single by Allen scored Davis, and Cunningham tied the game with a two-RBI single.

Fuqua went hitless for the next four innings, before the missed opportunity in the tenth.

“I was really impressed with their pitching. They kept us off balance for most of the afternoon,” said Cunningham. “Especially their reliever. When he came in, we really had trouble adjusting to him our first time through the line-up.”

Fuqua was scheduled to travel to Miller School on Friday afternoon for a 4:30 p.m. game in Charlottesville, before heading to Southampton Academy on Tuesday and back home against Steward School on Wednesday.