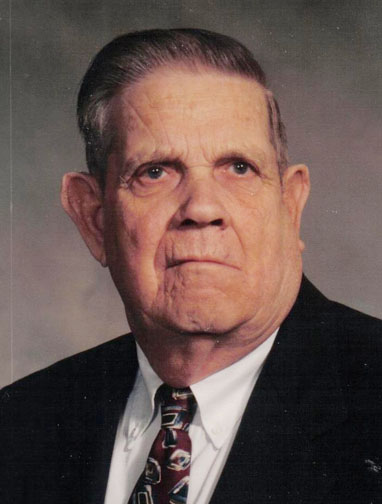 When appointed Chief of Police of the Farmville Police Department on September 1, 1954, he was the youngest Police Chief in Virginia. He served 42 years before retiring in 1996. Law enforcement was his life. “Chief”, as he was known by all, loved his “men” (police officers). He was the quiet peacemaker who stood tall and was a friend to everyone.

After his retirement, he was elected to serve as councilman for the Farmville Town Council. He continued to serve in this capacity until his recent illness and death. While on council, he served as Vice Mayor for a term.

He is survived by his wife and love of his life of 62 years, Mary Frances Overton; a daughter, Sallie Overton Amos and husband, Richard E. Amos Jr., and a granddaughter, Mary Grace Amos, who was the pride and joy of his life; three brothers and their wives, Campbell (Peewee) L. Overton and Shirley Overton of Farmville, W. Quinton Overton Sr. and Ann Overton of Rocky Mount, and Wyatt Lee Overton Sr. and Linda Overton of Farmville; a sister-in-law, Carolyn Hudgins Overton of Farmville. He leaves behind five nieces, Sherry Sheffield, Grace Helms, Rhonda Fox, Cindy Atkins and Margaret “Cissy” Coleman; and eight nephews, Wayne Myers, Frank L. Overton, Henry Webb, Wyatt L. Overton Jr., W. Quinton Overton Jr., Eugene Edward Overton Jr., David Wayne Overton, and James A. Overton – he loved them all like his own.

Family visitation will be held on Thursday, April 19, from 6-9 p.m. at the Farmville Church of Christ, of which he is a charter member.

A funeral service will be held at the church on Friday, April 20, at 11 a.m. Graveside services will follow at Westview Cemetery, Farmville.

Memorial contributions can be made to Fuqua School for the Otto S. Overton Financial Assistance Fund for students interested in a career in criminal justice or The Prince Edward County Rescue Squad.

“The world is a darker place this morning. A gentle light has gone out. But it will brighten soon with the memories he left us.” By Gilbert Wood, Jr., Chief Dispatcher of the Farmville Police Department and dear family friend.

“The Good Lord must have needed a good officer or someone who knew how to quietly and effectively get things done.” By Donald C. Blessing, Town Attorney and dear family friend.

DILLWYN – Okay, so it doesn't compare to a day at James River State Park, but students at Dillwyn Primary... read more