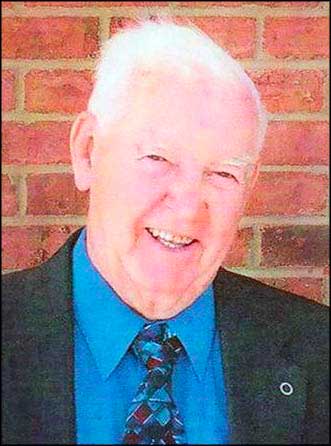 BUCKINGHAM, APRIL 12 – Carl Mitchell Henshaw, 85, passed away peacefully at his home in Buckingham on Tuesday, April 10, 2012. He was born on March 27, 1927 in Chesterfield, a son of Alton Pollard and Mary Hannah Henshaw. He married Janice Lynne Baxter on August 19, 1967.

He was an active member of the Church of Jesus Christ of Latter-Day Saints and a retired United States Marine, having enlisted in the Corps on April 1, 1945, and remained in the USMC active reserves until 1972. He was a farmer and a small business owner until his retirement in 2002.

Mr. Henshaw was the father of three Eagle Scouts.

He is survived by his wife, Lynne; three sons, Glen (Angela) of Port Republic, MD, Mark (Janna) of Leesburg, and Neal (Jolene) of Blacksburg; daughter, Susan Auten (Bryan) of Christiansburg; 12 grandchildren; two brothers, Walter Daniel of Powhatan and Alvin Pollard of Buckingham; and a sister, Shirley Furse of Macon, GA. He was preceded in death by three brothers, Alton Eugene, James Richard and Alma Troy; and a sister, Muriel Jean Lonborg.

Friends may also call at the Buckingham LDS Church building on Thursday, April 12 from 7 to 9 p.m.

Dunkum Funeral Home, Dillwyn, is in charge of arrangements.