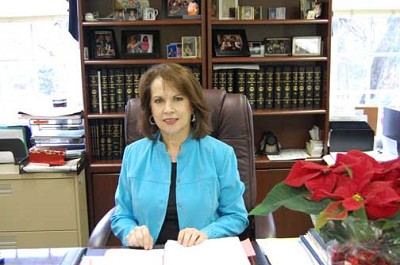 Ownby Is Retiring From Cumberland

CUMBERLAND – It's almost the end of the year 2011 and Cumberland's County Administrator, Judy Ownby, still takes her notes at board meetings in shorthand and talks to concerned citizens like they're her neighbors but in three months she'll be retiring from the County Administrator's seat, the county where she was born and raised.

She's hoping the upcoming new year will bring about a new time in her life. Opportunities, she said, that will lead to more involvement at her beloved rock church, Jones Chapel Baptist Church; plenty of gospel singing trips with her sister; and more time spent with her cherished family.

“I have really enjoyed this job,” she exclaimed as she repositioned herself at the round table in her office. “I can say that I don't doubt for a minute that this was the career and the job that God had in store for me and that's why I survived and have done well. I feel like I have.

“I feel like I've been the right person for this job up until this point and then I think there comes a time in everyone's life when they know that it's time to retire or make a change…I have my 30 years in and I'm looking forward to the next phase.”

She started working as an executive secretary on June 1, 1991, she said, and throughout the years the workload increased until she finally agreed to take over the County Administrator seat.

“That was when Franklin Grant was on the board,” smiled Ownby.

A little while later the Board of Supervisors asked her, since she was already doing the job, she said, to take the lead job.

“When I was approached…I hadn't applied for it. They hadn't even advertised for it,” remembered Ownby about how she got the job. “The board, at that time, asked me. They said, 'You're doing the job, why don't you accept it?' I had to think about it because it's a big step and it's not as secure as a position on staff so I thought about it, prayed about it, and then I had some encouragement from some people in the community…Finally, I decided, 'Okay. I will try this and give it my best shot.' I haven't regretted it for a minute.”

When Ownby started with the County, the board was made up of three supervisors and now, after redistricting, she's working with a five-member board.

She's currently ushering out her sixth Board of Supervisors and has agreed to help with the transition of the new Cumberland Board that was elected in November, which will be her seventh.

That's a lot of transition.

“One time there was a complete turnover,” added Ownby about election cycles in Cumberland throughout the years and her consistent leadership has been the one constant familiarity.

“If one board member asks for something that he's interested in and I've gathered that information I give it to all of them…I like people and I've tried to treat them in a way that I would want to be treated too.”

Ownby remarked about how happy she's been with the people she's worked with while in Cumberland.

“It's been a good career,” she offered.

And changes-she's seen them all, she said.

When she first started working for Cumberland she was in the basement with the building inspector, she said, and the county administrator at that time was in a room that is now a storage room for cleaning supplies.

“With computers, we started out with one person who developed some programs for us,” she offered. “We didn't know about email. That's what is so much easier. Instead of having to pick up the phone and call all of the staff for any question, you just shoot an email and if they are busy they don't have to answer it right away.”

Although board meetings in Cumberland can still be lengthy, Ownby can recount meetings that lasted into the next day.

“I can remember them going into one in the morning,” she laughed.

Getting things done was also much simpler earlier on in her career, she said.

“It used to be easier to get something done,” she added. “Now, there are all these rules and regulations and there are more every year but the three member board-we had twice a month meetings then.”

Delegating tasks is also something she has learned while being in the role.

“When I became County Administrator I was here until 6:30 or 7:30 or eight o'clock every night during budget times and I would get up in the middle of the night and work on the budget,” she remembered. “It was new and even though I had helped the county administrator on it before it was my responsibility-I put in a lot of hours-and I had to learn to let go. I was used to doing things my way and I liked knowing it was done by a certain a time. That was something I had to learn to do. Let go of responsibilities and delegate. I've learned that rather well. I had to gradually give up things because you can't do it all…”

It was only just a few boards ago that Ownby gave up her budget responsibilities.

“They said to me, 'What would we do if you were in an accident and had to be out or were sick? Who knows how to do the budget?' I said, 'No one.'”

That board then delegated to Ownby to find some back-up.

“That's when we changed Jill's (Matthews) role and I brought her in to work on the budget,” she offered. “Now, she's completely taken over with getting the budget over and getting it in the computer and getting a balanced budget to the Board before they have their first budget work session. That was a big change for me.”

She'll be officially leaving on March 31, 2012, which gives the incoming Board of Supervisors a transition period, she noted.

The most important question was also answered, “What do you have planned for when you retire?”

“Everybody asks that,” she laughed. “Somebody said, 'Well you're going to get your closets cleaned out and then what are you going to do?' I want to be more available for my grandchildren too and help them some. I've already told them I'm not going to be a fulltime babysitter so don't look for that but a day or two a week, especially the little ones that haven't started school. I'd like to spend a little time with them. Then I want to do more work in the church because I'm involved now but there are some things I can't do because I'm working…That's something I'm looking forward to.”

Ownby has ten grandchildren-they range in age from 20 (this month) to 18 months.

Then, there will be plenty of time for those gospel-singing trips with her sister, she smiled.

Oh, and there's already one big plan that's in the works, which could be seen as a family retirement celebration, she offered.

“In June, with the whole family, Carol's family and my whole family,” she offered. “We are all going to Tennessee for a week to stay in one of those log cabins. We're going to do that. We did it four years ago and they've been asking ever since when are we going back and so I decided that this would be a good year to do it!”

Being born and raised in the county is also something that has assisted her throughout her time as County Administrator, she offered.

“I think at the time and somewhat still now people like someone who is homegrown,” she offered. “I think the citizens are better about that now…but way back when they liked the fact that you were born and raised in Cumberland County and went to Cumberland County schools.”

Previous county administrators even told Ownby that their jobs were made easier by her being on the staff because she knew the county and the people and could fill them in on things when calls came into the office, she explained.

“I'll just have to adjust to a completely different routine come April 1 and I think I can do it,” she laughed.

She also says she has learned to listen to Cumberland's citizens and find solutions.

“Even if you can't do anything about it if you sit here and listen to them-most of the time that is what they want-for you to feel like you understand their problems,” she said as she offered some advice. “Even if you can't do anything about it…sometimes you can think of some alternative…and then they leave and thank you… I want to treat them the way I would want to be treated.”

Recently, Ownby has been flanked by Assistant County Administrator Jill Matthews. A team that can solve problems and get projects completed.

“Jill is smart and a work-a-holic,” offered Ownby. “She's very knowledgeable and she can do anything she wants to do. She's made it much easier for me. I've often said we complement each other. There are areas where I think one way and she thinks another way and we are able to talk those issues out. I rein her in and other times she convinces me… I think it's good that you have two people who don't think exactly alike and are able to complement each other and work well together to get a good job done. She's top notch-no doubt about it.”

When Ownby thinks back on her years spent as County Administrator, she said, the working relationships between the County's staff, departments, and Constitutional Officers is one thing that will always stick out in her memory.

“This was a neat thing that we were proud of,” she said. “We did the staff retreat, at no cost to the County, to think of ways to save the County money. We took time out of our own weekend to get together and we implemented a lot of the ideas. That was not only fun for us to be together but it was a benefit to the County. That was a few years ago when we were having a hard time.”

Later Ownby continued and said, “We all work together and the Constitutional Officers have been great trying to reduce their budgets…ours have tried to work with us because they know we are in a tight position. I've been thankful for that-they've just been so cooperative-and all of our departments have done the same thing. They have understood and I think when people understand what you face they try to work with you.”

When it comes to the future and development in Cumberland, Ownby is right on target with the rest of Cumberland's residents-she is also holding out hope for a grocery store.

“I hope we have a grocery store!” she exclaimed.

“And people don't understand how hard we've tried and recruited,” she continued. “I think we will get one eventually. That's a priority with everyone you talk to. It's not from a lack of trying. I promise you.”

FARMVILLE – For the third consecutive year, Longwood University's Police Department is ranked among the top 500 security programs in... read more