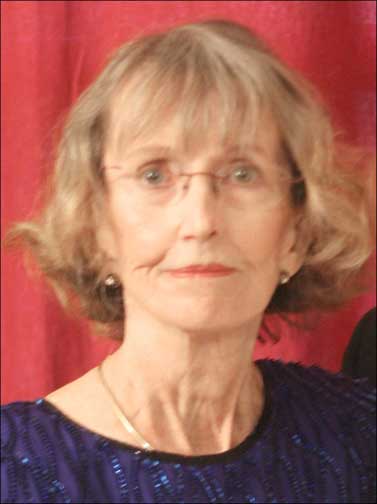 A native of Richmond, she was raised in Clarksburg, WV and graduated from Clarksburg HS in 1950. After graduating from Wellesley College with a degree in Zoology in 1954, she performed bio-chemical research at Beth Israel Hospital in Boston, MA. She later completed post-graduate studies in art at the University of Wisconsin. During her time in Boston, she met and married her husband of 55 years (as of December 6), Dr. Allen Pois, where they began their commitment to a medical career and raising three children.

Her unwavering support and love helped guide her husband through his career as a doctor and thoracic surgeon. Without her support, he would not have achieved his career goals that included assignments in Richmond, Madison, WI, Bowling Green, KY, and Cleveland, OH. A professional in her own right, Mrs. Pois achieved success as an artist with exhibitions of her work in Florida, Kentucky, and Virginia. Some of her pieces can be found in private collections throughout the country including Wisconsin, Connecticut, Kentucky, and Virginia.

After retiring to Cartersville, Mrs. Pois continued to pursue her many passions including gardening, writing, needlework, knitting, culinary arts and researching family history. She was a member of the Huguenot Society of Virginia and the Daughters of the American Revolution. She also enjoyed spending significant time at her home on Sanibel Island in Florida. Throughout her life, Dr. Pois had an unmistakable passion for animals, including the many that wandered onto her property in Cartersville and soon found a home.

An inspiration to all who knew her, she was known for her intelligence, love of learning, kindness, and gentleness. Her moral integrity and ethical standards challenged those who loved her to be better people. Everything she touched became a thing of beauty. Among her many interests and talents, her commitment and support to her family and her children will always be remembered most. As a result of her life, the world is a better place.

Burial will be private. Donations may be made to a favorite cause of Mrs. Pois', St. Joseph's Indian School (www.stjo.org).