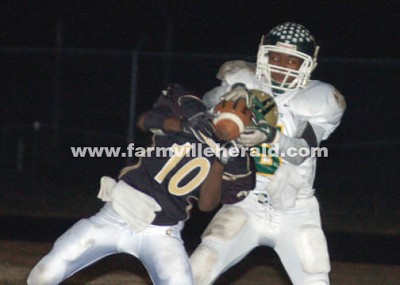 CENTRAL GARAGE – There is a saying in football circles that the best offense is a good defense. Buckingham County High School saw that first hand last Friday night in the second round of the Group A, East Section, Division 2 Playoffs. Unfortunately, for the Knights, it wasn't their defense doing the scoring.

The host Cavaliers took advantage of five second half turnovers by Buckingham to turn what was a very close game toward the end of the third quarter into a sizeable 32-14 decision.

“When you get to this level, it's turnovers that get you beat,” said BCHS head coach Craig Gill. “I was pleased with the effort. They gave me everything they had, but we couldn't overcome those turnovers.”

The Knights trailed 6-0 at the intermission in a first half that featured the defense of both teams. Buckingham turned the ball over on downs inside the KW 30-yard-line on the opening drive of the game, and the Cavaliers jumped ahead 6-0.

Both teams traded punts for much of the half. Buckingham appeared to tie the game on a 45- yard run by Kenneth Johnson late in the first quarter, but the fourth-and-three play was called back due to a late illegal block in the back call, which forced the Knights to punt.

The teams continued lobbing punts at one-another until the intermission. For two teams known for their wide-open offenses, the 6-0 halftime score caused many to scratch their heads.

The tone for the remainder of the game was set on Buckingham's first possession of the second half. BCHS senior quarterback Tarian Ayers fumbled on the BC 45-yard-line, and the ball was returned for the touchdown.

Late in the third quarter, the Knights finally got on the board, as Johnson completed a long drive with a one-yard touchdown run to pull the Knights to within one score. A missed extra point kept the Cavaliers up by six, and put a damper on the momentum Buckingham had gained.

King William answered back. Using a counter play, the Cavaliers appeared to quickly get into scoring position. That run was called back due to an illegal block in the back, but KW ran the same play again and this time it worked. The runner was brought down inside the one-yard-line, but quarterback Freeman McPherson scored from one yard out with just nine seconds remaining in the third to give KW a 18-6 lead.

Then the bottom fell out. Freshman tailback Kyree Koonce fumbled on the ensuing drive. Moments later, McPherson hit a streaking Keith Montgomery for a 45-yard touchdown.

Down 26-6, Ayers' attempted pass was tipped and intercepted by defensive lineman Barton Stone, who ran the ball back for a touchdown.

Buckingham did manage to go out on somewhat of a positive. Ayers capped a late drive from two-yards out when he found LA Briley in the endzone. The two hooked up again on the two point conversion, but with just 3:10 remaining, the prospect of a late rally was all but gone – even with Buckingham's quick-strike capabilities.

“I thought we played well, the defense especially,” said Gill. “We just made too many mistakes. Their defense scored twice. It's hard to recover from that.”

For the second straight season, Buckingham's season ends in the second round of the playoffs.

“Maybe we'll figure out how to get past the second round some day,” said Gill. “We've played 12 weeks, and they've given me everything 11 of those times. This has been a good group to work with.

“The seniors have won close to 30 games over the past three seasons. That's something to be proud of, and it's a testament to the character of these young men.”