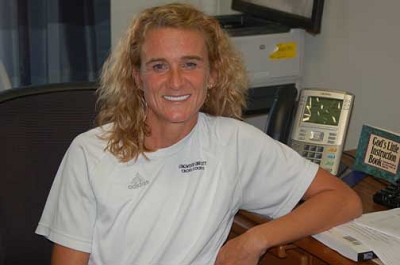 FARMVILLE-On the north side of a refurbished Tabb building is an office with a large window and a scenic view of High Street. Tabb is a survivor of the devastating fire of 2001 that destroyed the connected and beloved Rotunda.

It looks rather pristine these days.

It is here where, on occasion, one can find Catherine Hanson, a fit, petit blonde with a bright, friendly smile and a sun-baked tan. She is the men's and women's cross country coach on campus.

Still, if you listen closely, you may just hear the road and the gorgeous day behind the paned glass calling to her.

Catherine has been doing just that much of her life. Running.

“I was probably (a) five-six and a hundred and fifty-two (pound) very strong field hockey player in high school,” she says, seated at the desk, wearing shorts, a short-sleeved shirt and running shoes. “And our coach had us run. And run and run.”

The team ran down that estimated mile long driveway and back at Notre Dame Academy in Middleburg. She hated it at first-all that running. It seemed like a marathon then to a teenager, but it wasn't long before Catherine was running a few races around Washington D.C. and permanently hooked on this running kick.

“I think it's the freeing your subconscious mind,” she says. “You know it's like driving-it's like falling asleep on your pillow in the evenings. For me, it's time to go out, plan workouts at work, plan when I'm gonna do things, over-think probably a lot of things, as most runners have that type 'A' personality when we tend to over-think and over-analyze.”

Catherine doesn't just preach running to her team, she runs the run, too.

Asked how much she does now, she hesitates before offering, “I'm probably running about 80 miles a week.”

She concedes it's a lot and it's hard not to be amazed. That's longer than a trip to Richmond or Lynchburg from downtown Farmville.

It's been that way for a long time. She had a jogging stroller she gave up a couple of years back that once was used with her three sons (the oldest is 17). She figures it has about 90,000 miles on it.

“For real,” Catherine emphasizing what otherwise might seem a surreal number. “And not only did I like run on the day that my babies were born-literally, all through all my pregnancies-I think I ran eight miles with my last son the day he was born. It took me two hours, but I still did it.”

The now-single parent-who has been ranked nationally as a triathlete-is a picture of health, but her road of life has not been a straight one. About two years ago she says they were on their way to Boone…

“I just started not feeling well,” she said. “And it was that feeling of toothache, sinus infection, you can't tell the difference and it had been going on for a long time. And that trip, it really hit me.”

Catherine, who is rarely sick, went to a doctor and said she needed to see a specialist.

“I have a…actually very bad valve now at the base of my esophagus and when I run, it particularly is loose,” Catherine explained. “So (in) 22 years of me running, this valve has been loose and sometimes when I run hard workouts, I feel like I get acid reflux.”

She had gotten used to it, chalked it off as harmless, but she would find out that had stripped the Barrett's Syndrome into a couple of spots that were cancerous.

“I don't think I initially wanted to accept it. I didn't want to lose my athleticism. I didn't know what it meant to me at the time, that I'm more than just a runner,” she said.

Only a small percentage of those who have Barrett's Syndrome develop cancer. But Catherine was one of the not so fortunate few.

She started treatment and had two surgeries, kept it mostly to herself, (she would inform her supervisor) and tried to soldier on, even, yes, running as she was able. And, along this journey, also found out just how meaningful it was to her.

“…There really is a window of time in between your treatment that I would go out and try to hold on-and I'm not sure what it meant to me-but I tried to hold on with some aspect of myself because chemotherapy depresses you in ways that nobody can really relate to,” she said. “It is a very powerful drug and it usually took about four to six hours before and I would put on my shoes and head out at least feeling like I was doing something-at least feeling like I was still gonna be close to Catherine.”

Swallowing was tough, and it was constantly a battle in balance and nutrition.

She commented, “But all through this process I realized that when I was in the treatment rooms alone at the hospital and there were couples in there and people much, much worse off than I am, that the balance of all of it and what exercise-not just running-but what exercise really does for you is critical.”

One doesn't have to have cancer or chemotherapy, she feels. It can be arthritis, depression…

“…It just gives you such a feeling of empowerment and control and no one can take that away from you…You can be sick, you can struggle this way, but nobody can take that away from you,” Catherine said. “And I don't think if I didn't have this gift, at least the motivation, I'd've made it through. And I think my age and the good health I was in had a lot to do with it.”

She offers, “…If you're healthy, you're setting yourself up to get through some of your bigger challenges. And, honestly, I don't know if you know the stats of esophageal cancer, but 18,500 people get it a year and 16,000 people don't make it. It's a very-depending on where it ends up in your esophagus-it's hard to beat.”

While they thought it was caught in time, that doesn't put one's mind so at ease. She didn't tell her parents, who live a long distance away, until it became unmanageable. It was tough at home-letting her family help-and it was tough at work, too. Pretty much all she could do, she says, was coach.

“I didn't want my kids to know at the team. I just-the first year I just-we didn't have much of a season that year at all. I…didn't recruit,” Catherine reflected. “You know, it's like, literally, you pick the eggs that you wanna dispense and you just do what you can.”

She has flexibility in her schedule and Catherine feels that if she worked 9-5, she would have had to take a leave of absence.

“They've been very, very good to me. I'm very, very blessed,” she said.

She lost a lot of her hair, but not all of it and it wasn't so noticeable. It's a big blur treatment to treatment, she says. A tablet, that doesn't always suit a particular cancer, she also found seemed to help.

“But once I actually let people in, it really-you talk about the light end of the tunnel, the love and support,” Catherine says.

Her parents came down and celebrated when she had her last scope done and it was clear. Still, she notes, you're in a maintenance mode.

A finely-tuned athlete often can tell when something is wrong, and when something is going right, too. She knows she's getting stronger all the time, noting that she “can feel it.” She can see it in her running, that she's sleeping better and only cries at sad movies now, not just sitting around.

Running can definitely boost your confidence, Catherine says, boost self-esteem, gives you a sense of purpose and control of your life. “And that just sort of domino effects into eating better, making better choices with nutrition and also making connections with other people,” she said.

This year-she says that she's learned “so much about how you look at life and what running really means to me and identifying myself as a person. It's not who I am or what I am. I'm not just the running lady that people see everywhere.”

Just before last Christmas, Catherine received a clean bill. She bought a little tree and decorated it with periwinkle ribbons and sat it on top of her kitchen cabinet.

Periwinkle is the color of esophageal cancer.

“It was a great Christmas, for real. That's all I needed. It's all I wanted. Didn't need anything else,” Catherine says.

“Maybe a run or two,” she adds with a chuckle.

She thinks its great that there's a cancer support group. We need to have more of that, she says, especially for people like her who don't know how to ask for help.

“And I would categorize myself as one of those people, easily. But I didn't know that before cancer,” Catherine said.

The single parent has a healthy dose of activities (one of her boys plays soccer another wrestles) and she volunteer coaches soccer and goes to the games. Add to that, she's also working on her Master of Science degree at Longwood and recruits at night.

Her schedule includes almost no TV (she allowed herself to watch when The Voice was on), but there is no hint of regret.

She wants to start a kids on the run program in the spring that would encourage children to run. There's so much potential here, she feels, especially with the High Bridge Trail State Park.

It's setting realistic expectations to start.

“No,” Catherine says, when asked if running tires her out. “If you're really taking care of yourself, which again, with everything that I have on my plate being (a) single parent of three boys, two teens, and in school…the volume tends to get to be too much for me sometimes and I notice it when I'm restlessly sleeping. But when I finish, what do I feel? Accomplishment, flat-out sense of pride. I feel like I am who I am because it's so much a part of who I am and has been for years.”

She also notes that it's not always fun every day, especially if you're in a state of emotional stress or something stressful in your life. Still, she says she enjoys the endorphins.

“It's what I do for myself. It's the one thing every day that I do for me,” she explains. “The rest of the day is for everybody else, but I think that's why I enjoy it. I just hope I can stay healthy.”

In the meantime, the road is probably beckoning…

For your health. For the whole of the person. For life.