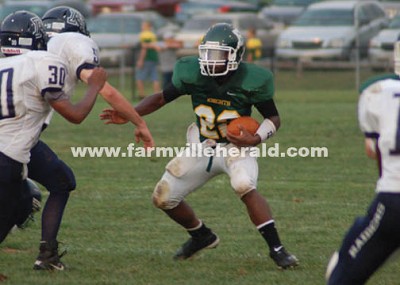 The belief all season has been that the strength of Group A football lies in what was once Region B – particularly the James River District.

The Buckingham Knights will put that to a test on Friday night, as they travel to King William to face a tough opponent in their second-round Group A, Division 2, Eastern Section Playoff Game.

Undefeated King William, and its high-octane offense, makes Buckingham an underdog. The Knights, however, have been in a similar position before. Twice actually, and though both playoff games resulted in overtime losses at Gretna, the Knights proved they belonged on the field with the state's elite teams.

The Cavaliers are in a similar situation. They're also playoff-tested and lost to Gretna in last year's Group A Division 2 Semifinals.

It's safe to say that both teams would like another shot at the Hawks, but that can't happen for at least another two weeks.

Both Buckingham and King William run a high-octane offense out of the spread and have no trouble putting up points Both teams are averaging an identical 46.5 ppg. offensively. The difference appears to be on defense. The Cavaliers are giving up just 7.55 points per game, while Buckingham (9-2) is allowing a very solid 18.6 ppg.

“King William has a lot of speed, a big quarterback, a fast tailback and an All-State receiver,” said BCHS head coach Craig Gill. “They're quick, athletic and have a strong defense. They have a lot of weapons, and they use all of them. We'll have our work cut out for us.”

King William (11-0) is led by quarterback Freeman McPhearson, who is a dual-thread quarterback. He is 83-164 passing for 1556 yards and 26 touchdowns against six interceptions. He is also the team's leading rusher with 806 yards on 120 carries and 13 touchdowns.

McPhearson's favorite target is Davonne Johnson, who has 32 catches on the season for 757 yards and 14 touchdowns. Keith Montgomery has eight catches for 193 yards, but five of those grabs have been for touchdowns.

In an offense that allows for some mistakes, the Cavaliers manage to take good care of the football. They have ten turnovers on the season (four lost fumbles) and are +16 in turnover margin. The most points King William has allowed in a single game is 15 in a 27-15 season-opening victory over New Kent.

Buckingham is no statistical slouch either. The Knights are led by dual-threat quarterback Tarian Ayers, who is second on the team in rushing. He is 97-181 for 1541 yards 14 touchdowns and seven interceptions.

On the ground, the senior signal caller has rushed 135 times for 834 yards and 18 touchdowns.

Kenneth Johnson leads the team on the ground with 879 yards and 15 touchdowns on 92 carries. Complimenting him in the backfield is freshman Kyree Koonce, who has 660 yards and 14 touchdowns on 78 carries.

King William's defense and home field may give the Cavaliers the advantage in this game, but don't count out Buckingham's strength of schedule. The Knights' only two losses have come to Goochland and Amelia, it's safe to say that Buckingham knows how to win a ball game.

An early lead one way or the other will likely mean little in Friday's contest, as both teams have proven the ability to put a lot of points on the board.

Last year: Did not play