Harris Reflects On Time As Sheriff 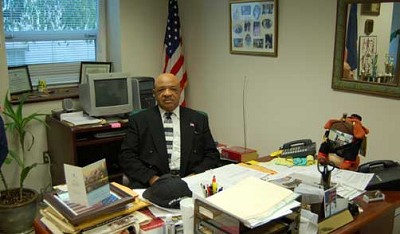 PRINCE EDWARD – Travis Harris isn't wearing his customary attire this autumn day, but rather a coat and tie at the office.

Harris, who has donned the brown and white uniform of Prince Edward County's sheriff for nearly 12 years, is closing the books on a career in law enforcement. The winner of three elections will call it a day at the end of his term in December.

The suit is for a funeral he'll be headed to later that day, but there isn't any hint of sadness when it comes to retirement.

“Well, you know, collective things,” Harris says, when asked what it was that made him sure. “No one particular or specific thing, you know…taking in account a lot of things of my age and my years of service, changing of the times, trends…The violations that people do based on what they used to would not do and just anything will go now.”

Things, he offers, weigh heavier on him now that he used to take in stride.

But the job has its redeeming moments, he agrees-more good times than bad. You feel good, he says, when you can help people with problems and solve a lot of them. (Sometimes it's just with talking with folks outside of the office.)

On the day The Herald sat down with Harris it was the day before his 64th birthday. Harris began his career in law enforcement in April of 1972 working for the Virginia State Capital Police. He had left the Army in 1970 and was working at The Carpet House and he saw a position opening advertised in the newspaper and applied.

“…Most…young boys and young men either want to be policemen or firemen-especially coming from my day,” Harris says. “And I kind of had that in my mind.”

He went to the police academy, worked with the department from 1972 to December of 1975, commuting from Prince Edward about an hour and a half each way.

Harris knew Gene Southall, who was then running for sheriff. Harris remembers Southall noting that if he won the election, and if Harris decided he wanted to be closer to home, that they would talk about it.

“And when he won the election, he kept his promise,” Harris recounted.

The department in those early days was a bit different.

Prince Edward had its own jail in the courthouse, which was manned by sheriff's deputies. (Prisoners are now held in Piedmont Regional Jail.) Harris was hired as a road deputy, but worked the jail on occasion when they were short or needed extra help. Those who worked the jail sometimes dispatched (only two staffers were considered dispatchers) going back and forth between the two.

Crime was different then, too. On the Sunday day shift or evenings a road deputy worked by himself most of the time. Most of the time on Friday or Saturday, two people worked evenings. And most of the time, there was a split shift – from 6 p.m. to 2 a.m. Then, in those early morning hours after 2 a.m., the day shift was on call.

It was up to dispatchers to sort out whether it was something that could wait during those on-call hours.

“We started out, the first four years I know, using our own cars. The County paid us mileage,” Harris said.

His was a 1971 solid black Plymouth, a former state police car, he purchased from Farmville Iron & Metal. Deputies, in those days, bought their own gas and paid their own insurance, though-in addition to mileage-the County did furnish the radio.

The County took a first step in the auto business with the purchase of four cars-one for the sheriff, one for the chief deputy, and the two were “pool” cars. The County eventually went to having a car assigned to a specific deputy, extending the service of the vehicle.

Southall retired in 1999 and then Captain Harris, encouraged by folks to run, threw his hat into the ring. Initially, he says, he didn't think of running, wondering what was going to happen. He knew, however, he wasn't ready to retire-that he needed more years.

It's the first time he had ever run for anything, much less a countywide office.

He remembers that first day, too. It was exciting, Harris said, adding that it took awhile to really grasp it all.

“I knew what my responsibilities were to some degree and…just took awhile to kind of plan 'em and digest it all,” Harris said.

He doesn't remember anything major occurring that first day, and that was OK. Harris says he still likes quiet days.

As far as most memorable days, he points to being sworn in as sheriff, and when they have serious complaints or a homicide and they're able to solve it-even something like stolen goods, where they go out and investigate it and those things are solved.

As for regrets: “Well, not really. They're some things…we pretty much ended up getting the equipment that we needed…to update the department in a lot of stuff.”

He adds, however, he would like to have seen computers in the cars, where deputies can run information without having to call dispatch.

Many of the cars have cameras, which Harris notes records the actions of the officer as well as the person they stop. It costs $6,000-$8,000 per car.

Harris says he feels “very comfortable” with the staff he's leaving. He also notes that they've been working on accreditation. It is very rare, he notes, for it to be done under three years and he says he was hoping they would have it done before he leaves, offering that he was sure that it would be in the next year, especially if his chief deputy wins. Capt. Wesley Reed is the accreditation officer. That process sets procedures based on state Code. The staff is all certified officers from the police academy, gone through the accreditation process and have polices in a handbook and on disc.

What he says he won't miss is the complaints and calls at home at two and three o'clock in the morning.

His wife, who has already retired, asked Harris if he is going to keep the scanner on all the time when he retires.

“I said, well, for awhile I thought I'd keep it on some…after things wear down I'll kind of get it out of my system…I don't think I'm (going to) cut it off right away totally,” Harris said.

What he figures he will do is hunt and fish more, tackle some of the things he wants to do on his property, and maybe take on some gardening work. Harris also likes to cut grass, cutting it not only for himself but for the church and helping others.

The quiet man, who has a knack for working with people and defusing situations, will exit quietly.

Harris, who has probably-with some persuasion-served as many warrants in the office as out in the field, reflected on handling things in a low-key way.

“I always wanted to do my job but I always want to respect people,” Harris said. “And the thing they taught us in the academy (is) the law is designed to work with the people and not against the people…You've got the spirit of the law and the letter of the law. And I tried to keep the spirit mixed in with the letter in dealing with people.”

His office is still full. There's a newspaper clipping on the wall, softball and karate trophies over the years, a plush bull dog given to him when he first became sheriff, some certificates, a poster of the Chicago Bulls (their last year with Michael Jordan) and a collection of photographs yet to be packed up.