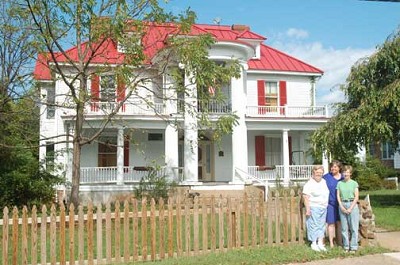 The Woman's Club of Farmville has seen many changes since it began as The Fortnightly Music Club in 1914. Today, club members hope to draw on the past to add more members for the future.

“It's an old club, and we've gone through many changes,” stated Connie Wells, Woman's Club past president.

The first major change for the club came in 1920 when the Fortnightly Music Club was re-organized as the Woman's Club of Farmville. Original objectives of the club were “study of such subjects as music, literature, art, and current events and the promotion of civic improvement and social welfare.”

The club initially met on the second floor of The Farmville Herald building. Later meetings were held in members' homes, then at the State Teachers College, now Longwood University.

“When you've been a club president your eyes are opened to the different areas in the community that we touch,” Connie Wells noted.

Over the years the Woman's Club has reached into many areas of community life. Some of their past projects include: the establishment of Grove Street Park (1925); a cancer drive (1936); establishment of a Motion Picture Guide in The Farmville Herald (1931); mending linen for Southside Hospital; contributing to war services during World War II; establishing a recreation center for servicemen and assisting the Red Cross; supporting Patrick Henry Boys Plantation (from 1950s on); radio spots called “Be an Informed Consumer” on WFLO; sponsorship of the Virginia Museum Artmobile (l984); a creative writing contest for Prince Edward school children (from 1985 on); support of a building fund for Farmville Prince Edward Library (1985).

As the club became more active, members decided that a permanent home was in order. In 1956, the Farmville Woman's Club and Junior Woman's Club incorporated to build a clubhouse that would accommodate the two clubs and be available to other civic organizations for meetings and gatherings. When a large home on High Street became available for purchase, the club bought and remodeled it as their clubhouse.

Financing this project was accomplished through a number of fundraising activities including “The Follies of 1955,” a Harvest Moon Festival, and a Miss Farmville Contest. The clubs met at this house until 1978 when the cost of maintaining it was no longer practical.

When the clubhouse was sold, again the money was funneled back into the community. Proceeds from the sale were used for substantial contributions to Southside Hospital, the Community Library, the Rescue Squad, local fire departments, and other charities.

“As women we're trying to give back to the community,” the membership chairman noted. “You need to give where you live. We keep the money from all our projects in our community – which is very important and what we're about.”

That is also the message the club hopes to share with women in the community, possibly newcomers to the area, who are unfamiliar with their work.

Woman's Club projects continue to evolve with changing needs of the times.

“A few years ago we held a tea to provide bone density tests for women who could not afford them,” stated current club president Sharon Yoder. “Last year we started a collection in the library of books about women who have made significant contributions.”

In 2006 the Woman's Club donated $7,000 to Southside Community Hospital to support mammograms for women without other means to obtain them.

“We decorate valentines and pumpkins for the nursing homes,” the current club president noted. “We also donate paperback books and greeting cards to Piedmont Jail.”

“Every month we have a shower for a local charity,” the membership chairman added. “FACES is the charity for this month. In December we also collect money for the Heifer Project and do bell ringing for the Salvation Army.”

In addition to their charity work, the club offers informative programs at their monthly meetings, such as a recent update on Farmville's Downtown Revitalization Program.

“We're also having a program on what the Salvation Army does with the money in this community,” the club president added.

In order to keep all their projects and programs going, the Woman's Club hopes to attract more members, possibly women new to the community who are looking for a worthwhile and rewarding use of their time.

“Many of our members are former professionals,” Schall stated. “They have been in the business world and they come to us with the knowledge of how to get things done.”

All women are welcome at the Farmville Woman's Club – there are no age restrictions.

“We like to think of our club as a bright spot in a woman's life that enriches their lives and the lives of people in the community,” Connie Wells concluded. “We would like to share this opportunity.”