A Blessing For Turning The Earth 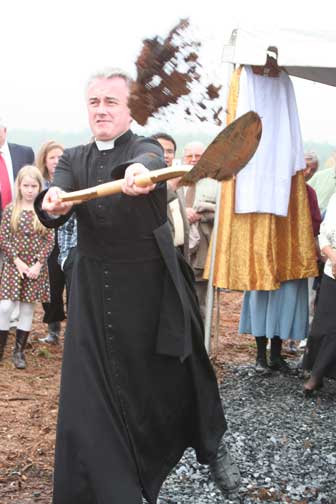 BUCKINGHAM – As priests from as far away as Switzerland and New Zealand gathered for the Blessing of the Ground and the Turning of the Soil for the new location of St. Thomas Aquinas Seminary, plans for the proposed theological institute moved from the drawing board to a hilltop in this rural community.

Situated on over 1,000 acres off Route 659, Ranson Road, the site for the seminary includes a large tract formerly owned by MeadWestvaco as well as an adjacent farm with a residence.

In August 2009, the Planning Commission first reviewed the request for a special use permit to locate the seminary on land zoned A-1, Agriculture.

At that time, Linda Fortin, speaking on behalf of the seminary, explained that St. Thomas Aquinas Seminary in Winona, Minnesota had outgrown its current facility and was looking to relocate and expand.

She told commissioners that the SSPX, Society of St. Pius X, seminary offers a seven-year program for young men ages 19 to 35 who want to prepare for the priesthood.

A narrative that accompanied the application stated that along with dormitories for the students and housing for the instructors, the facility would include a place of worship, a community center, education buildings, a dining hall, a guesthouse, a study center, a parish and a retreat house.

Additionally, the narrative added that a portion of the property would be used for vineyards, gardens, fruit orchards, and pasture for cattle. The majority of the remaining property would continue to be used for timber production.

During her presentation to the Planning Commission at that August meeting, Fortin said the seminary in Winona could only house 85 to 90 students and they were at capacity. She added, “They have more and more who want to enter so they have outgrown it, they don't have any more space.”

Fortin told commissioners that the Buckingham location was ideal because of its rural and scenic setting coupled with its proximity to Washington D. C., Richmond, Charlottesville, and Lynchburg.

After an informational meeting and several public hearings, as well as a visit to the seminary in Winona by County Administrator Rebecca Carter and Supervisor Danny LeSueur, the Board of Supervisors, concurring with the planning commission's recommendation, approved the special use permit in December 2009.

According to Fortin, who is now overseeing the construction project, contractors should be able to begin “moving the dirt” in December. “We have filed the soil and erosion plan,” she stated.

Fortin shared, “We are hoping for the seminary part to be completed sometime in 2013, probably toward the end of that year.” She added, “That is the seminary. The church will take a little longer.”

Although construction plans call for putting in the footings and crypt for the church, Fortin said the main focus at this time would be on the seminary. She said the construction cost is estimated to be between $25 million and $30 million.

“They need to move rather quickly because they are overflowing up there,” she stated, referencing the seminary in Winona, Minnesota.

According to Fortin, the facility in Winona will continue to be used in other capacities by SSPX. However, she emphasized, “Their seminary in the United States will be in Buckingham.”

Talking about the October 13 celebration, Fortin shared, “It was a very exciting day. We've been working on it for quite a while. I was elated to see the groundbreaking.” She added that by early summer, they should be ready to set the cornerstone.

Noting there were hurdles along the way that they had to overcome, Fortin shared, “But, we could see God's hand in this.”

She added, “I know they are really looking forward to moving to Buckingham.”

“Asset to the Community”

After participating in the groundbreaking, County Administrator Carter shared, “I think the seminary will be an asset to the community.”

She continued, “It will bring people from all over the world to our county for special occasions held at the Seminary.”

From an economic aspect, those visitors will help fuel local businesses, noted Carter. She added, “The students as well as the priests and instructors will purchase supplies and do their business in the county which will increase sales for our local businesses.”

She reminded, “Any time we have large construction projects underway in our county, more money is spent in our community.”

Carter offered, “I think the seminary will be an asset to the State of Virginia as well.”

She shared, “All of the people we have met have been extremely nice. I believe they will offer a sense of reverence to the community.”