IWA Rolls To Win At Fuqua 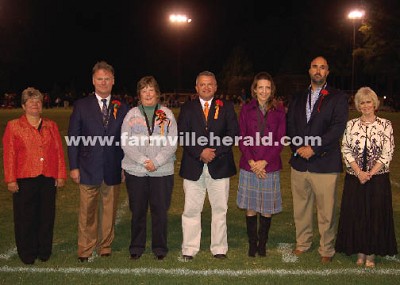 FARMVILLE – From time to time a football team is going to have one of those days. The key is for that day to be on a Tuesday. The Fuqua School Falcons weren't that lucky as Isle of Wight Academy ran over and around the Falcons to take the 41-6 victory.

“Isle of Wight is not a team that beats themselves,” said FS head coach Lewis “Skeeter” Fore. “They're good, and did an excellent job of ball control.

“They beat us in every facet of the game.”

Isle of Wight (3-1, 2-0 VCC) jumped out to a 20-0 lead, before Fuqua senior Charles Williams, who only had two rushing attempts in the first quarter, broke open for a 55-yard run to put the Falcons into scoring position.

Then, on fourth-and-goal from the IWA seven, Williams hit a wide open tight end Andrew Ware at the goalline for the Falcons' lone touchdown of the night. Despite playing its worst half of the season, Fuqua (3-1, 2-1) only trailed 20-6 at the intermission. Isle of Wight put an end to any idea of a comeback by the home team with a time-consuming third quarter opening drive that ended with Zeb Warnick's second touchdown of the night with 3:51 remaining.

Isle of Wight scored twice more in the fourth quarter. The first came with 10:51 left on a one-yard touchdown run by Greg Chaffer, and the second came on a 73-yard interception return by Hunter Triplett.

“There's not much you can say about this one,” said Fore. “They built a lead and didn't do anything that would allow us to get back into the game.”

Williams led the Falcons with 124 yards on 11 carries. He was 3-6 for 12 yards with a touchdown and two interceptions. Carter Cunningham, who got the start at quarterback, was 1-7 with two interceptions, before leaving the game with an injury. Larry Haskins, was held to just six yards on five attempts.

“We're having a little bit of a tough go right now, in that we're pretty banged up right now. Everybody is in a similar situation, but we're going to have to figure out a way to fight through it.”