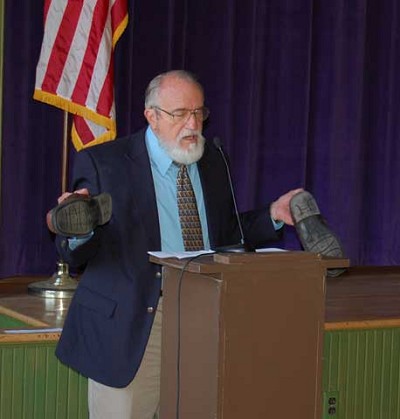 PRINCE EDWARD-A crowd has gathered inside the red brick-walled building on the corner of Griffin and Main streets. It is a day of celebration of the journey, but one that is yet to be completed.

Moton Museum, site of the historic student-led walkout in 1951 to protest unequal school facilities, is near its vision. The auditorium, with its fresh paint, windows with electronically controlled blinds and new look floor, speak to how much has been done.

“We thank you for coming out and sharing this day with us,” Moton Museum President Robert Hamlin offered at the Friday open house program. “We are hoping that it will help to spark even more interest in what is happening in terms of telling this story and preserving this history-because it is such an important history, not only for Prince Edward County and for the Town of Farmville, but for the nation and the world.”

At the back wall of the renovated auditorium is a portrait of Barbara Johns that hung in the Virginia Capital (one of only two women to have received such an honor) for about eight months and a list of 117 young people whose parents signed on to challenge segregation.

Barbara led the student walkout that April 23rd day in 1951. And that protest, and the actions of others in the succeeding days, eventually led to a court case-one of five that became the Supreme Court's Brown case, leading to the end of segregation in public schools.

“It touched us deeply to find out that even at this late time, 60 years later, there were grandchildren who were finding out for the first time that their grandparent was a plaintiff in Brown. So that those names are never lost in history, they'll permanently be on display in this building,” Museum Director Lacy Ward Jr. detailed.

There's also a long list of donors to date on display. It's a list they expect to replace. Ward noted that they “still have miles to go before we sleep. And as additional funds come forward, as additional funders move themselves further up the list, we'll acknowledge who's actually making this possible.”

He continued, “You're standing at a point at the end of phase one where some four-plus million dollars have been committed to making sure that this story is not lost.”

A film, Strike: April 23, 1951, by Tim Reid, shown to those attending the open house helped to bring viewers into the historic day. Still, while much work has been done, the classrooms that will also help bring the story to life when the work is done are mostly empty.

“This museum really is about understanding going from a set of segregated classrooms here in this county to a set of integrated classrooms here in this county,” Ward detailed. “And it took us 13 years to get there. It took 13 long and arduous years. They are very difficult memories for some people to deal with. We are trying to be sensitive to that, but we also know that for America to understand where it is today, it must understand the great burden that Prince Edward County carried on behalf of the nation between the years 1951 and 64.”

Ward detailed that they are $2 million plus six months away from realizing the vision for the space. When they have the money sitting in the bank, he explained, they will give the go ahead with a six-month timetable for construction.

“I can tell you that as of yesterday, we're well on our way for that new goal. The Tobacco Commission, again one of our early funders…voted an additional $400,000 to be invested in this facility…,” Ward said.

Ward thanked participants in the program. He noted that every time they do a program at the museum, they include Hampden-Sydney College, Longwood University, Prince Edward County Public Schools, and Fuqua School.

“…It may not have happened at the same time, but each of these four institutions-two public, two private, two higher ed, two K-12-each one of them endured that very painful transition from segregation to integration. Student body, faculty, staff, administration, boards of governors, each one has made that transition.”

Rev. William Thompson, Chaplain Emeritus for Hampden-Sydney College, offered the invocation. He invited those in attendance, prior to a reflective prayer, to take off their shoe or shoes. Rev Thompson noted, “For the Scripture says to Moses, take off your shoes from off your feet for the place whereon you're standing is Holy ground.”