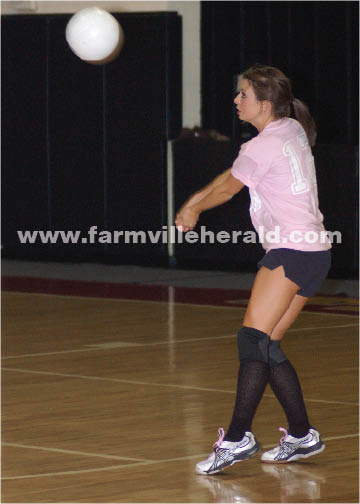 FARMVILLE – Things have been going quite well for the Fuqua School volleyball team. The Lady Falcons won their sixth-straight contest and exacted a little revenge over Kenston Forest Wednesday afternoon with a 3-0 victory (25-14, 25-17, 25-23).

“They played well,” said Fuqua head coach Lora Smith. “Maybe not as hard as they are capable of playing, but well enough to win.”

Wednesday's game was a continuation of what has been a solid month of volleyball for the Lady Falcons.

After a slow start that included a 3-2 loss to Kenston Forest in Blackstone last month, The Lady Falcons, who were once 1-3, have won six straight contests to move to 7-3, and in the mix for the regular-season championship.

“That was definitely a big deal for us,” said Smith. “They were undefeated before they came here, and we won, and it was a bonus for us to turn right back around and win on their court. Those wins will help us when they select the field for the playoffs.”

There is a long way to go until the playoffs begin, and the next three matches will tell the Lady Falcons a lot.

“Those are critical games for us if we want to win the championship” said Smith. “Not only for us in the standings, but for our confidence.”

Fuqua is hosting this year's VCC Volleyball Tournament. A top-four finish in the league would give the Lady Falcons home court advantage, so to speak, throughout the tournament.

Note: The Fuqua volleyball team is wearing pink uniforms throughout the month of October in observence of National Breast Cancer Awareness Month. On October 25, Fuqua will host its annual Dig-Pink night in a match against Blessed Sacrament-Huguenot.

BCHS Gets Back On Track With Victory Over Cougars