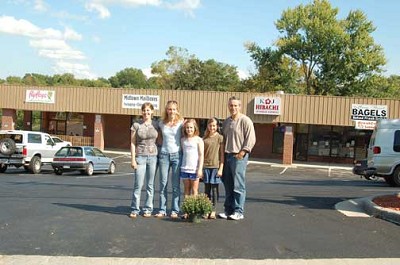 Betsy and Brian Eckert are all about family. Along with help from their three girls, they have renovated the former Putney Square Mini Shopping Center into the vibrant Main Street Plaza with three new businesses and the packaging/shipping business they have operated in Farmville for the past five years. “I had my eye on the property – not necessarily to buy,” explained Betsy “but to relocate from Midtown Square. I didn't think this location had ever seen its potential. We never really had any reservations about buying it.”

“I think the community appreciates the products and the services we brought to the area with Midtown Mailboxes,” Brian commented. “We strongly support our community and we hope to get community support in return. The Town of Farmville offered wonderful support as we remodeled – the zoning and building inspectors were great to work with. I can't say enough about their cooperation. We really could not have done this without our kids. They are very responsible and made it possible for Betsy and I to work even longer and harder than planned.” The girls helped with manual labor, cleaning, packaging, stuffed envelopes, landscaping and fixing dinner while their parents worked.

The Eckert family has been in Farmville for 17 years. It is not unusual to see one parent (or the other) and children running thru town as part of their commitment to physical fitness. Brian was a popular middle school teacher at Prince Edward for 10 years before he became an educational rep/sales manager for a classroom curriculum program. Brian states “I had the best teaching job in the world, but Saxon asked me to go to work for them and I believed in their product. If I sold a school their teaching curriculum – I am the one who came back and did the training,” “Brian did a lot of shipping of books in his position so he had real experience packaging and shipping,” Betsy added. As changes occurred with his job which included more travel and time away from home the husband and wife team decided to open their own pack and ship store – thus Midtown Mailboxes was born. Even though they share family responsibilities, it became clear that Brian had to spend more time at the store and Betsy took over the reins of home schooling the three girls. “We tried working the store on shifts,” stated Brian,” but neither of us was completely satisfied so I decided to focus on the store. We like home schooling because there is less stress and we have the freedom to travel or whatever.”

In addition to Midtown Mailboxes the Eckerts also opened Flip Flops – self serve frozen yogurt shop. “Betsy came up with name while on vacation in June. It was two and a half months from conception to opening the door. We are pretty pleased with the community's reaction so far,” Brian said. Also in the Plaza is KJ Hibachi Japanese Express and Main Street Bagels. All of which seem to be doing well with increasing traffic.

There are plans for the future for the continued growth and improvements of Main Street Plaza. Watch for their businesses on facebook and expect planned promotions from all four businesses. The Eckerts hope their family project will continue to grow, improve in appearance and become more of a destination for shoppers who like quality, convenience and service.