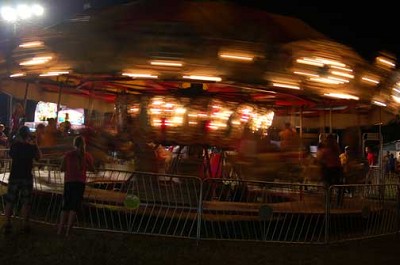 FARMVILLE – Nobody can tell which way the weathering wind will blow but one thing is for certain.

There are fair days ahead.

The Five County Fair is so close you can see it on the calendar if you look at next week.

Beginning Tuesday, October 18 and running through Saturday, the 22nd.

“We did change the dates due to trying to ensure that we got a top quality carnival,” Estes explained in an interview this week. “And the carnival that I did book, which is very good, could not come until October the 18th. So that's the reason we changed it.”

Cole Shows Amusement will run the carnival this year.

“And he wasn't available for a full nine days,” Estes said, “so we had to bring it down into five.”

Estes is as confident as a bear in a tug-of-war with an armadillo that the fair can achieve and surpass its normal level of fun and excitement in those five days.

Rather than the fair's good vibrations spread out over nine days, folks will know they have those five days packed with enough entertainment and interest to fill a fair twice that long, everything going on with a heightened sense of energy.

“We're doing all of the events that we had in the previous year in nine days,” Estes said, “we're going to do in five. But I did not eliminate anything. So I think that's going to be a positive.

“We'll have different things going on at the same time,” he enthused.

“The one big addition-we have a club from Longwood University that is going to put on a belly dance demonstration at 7 o'clock on Saturday night (October 22),” Estes revealed.

And how did the fair become hip to that?

“Someone in the fair association went up to Jarman (Auditorium at LU) and saw them perform and thought it was pretty neat and contacted them,” Estes explained.

“And they said they would love to come to the fair, just to put on a demonstration,” the longtime fair general manager continued, “so we made arrangements and we got them out there.”

Belly dancers, to go along with professional wrestling, a demolition derby, the animal exhibits, talent show, magic show, food, rides and prizes. And probably etcetera, too.

“I really do think we should have larger crowds, per night, and we're still going to do the children's day, let them in free until 7 o'clock on Tuesday and Wednesday,” Estes pointed out.

Tuesday: Cole Shows Amusement open the fair at 4 p.m. There will be balloon sculpture and magic show at 5 p.m., with the Petite Miss and Little Miss Pageant at 7 p.m. in the Varner Building. The Youth Beef Cattle Show is at 7 p.m. in the livestock tent. Free admission for students until 7 p.m. with fair school tickets. Home school students can get fair tickets at the admission gate.

Wednesday: Rides start at 4 p.m. Balloon sculpture and magic show at 5 p.m. and the Junior Miss, Teen Miss and Miss Five County Fair pageant at 7:30 p.m. in the Varner Building. The swine show is at 5 p.m., with the sheep and goats getting their turn an hour later. Free student admission again, as above.

Friday: Rides kick off at 6 p.m. and there will be professional wrestling at 8 p.m. in the Varner Building.

Saturday: Rides get going at 4 p.m. and the demolition derby is at 2 p.m., with the Longwood Company Belly Dancers at 7 p.m. in the Varner Building. The 50-50 drawing will be held at 11 p.m., as will the drawing for the Holland Grill.

Adult admission is $6 on Tuesday, Wednesday and Thursday, with $2 for kids 6-12, and others free.

The operation of the carnival's rides is “weather permitting” each day.

Town Is Pulling The Plug