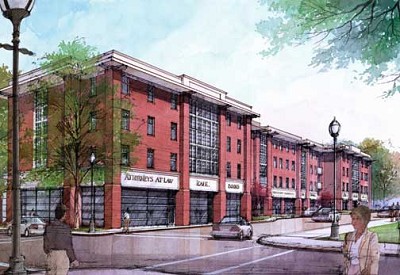 Town Council and Farmville's Planning Commission will hold a joint public hearing at 6:30 p.m. on Wednesday, November 9 for zoning action necessary to accommodate the project.

Prior to its public unveiling at last week's Town Council meeting, Town Manager Gerald Spates introduced it as “a very exciting project with the old Newman Tire Company property.”

A four-story development would see commercial activity on the ground floor, with three floors of two and four-bedroom apartments.

“We have been considering the Newman Tire site for quite some time,” Walk 2 Campus Holdings founder and president Matt King told council members. “We have a project that would hopefully begin construction sometime in February-March for delivery in May of 2013.”

The project's architect, John Matthews, with Mitchell/Matthews Architects, of Charlottesville, told Town officials the ground floor commercial space would see “a mix of retail, service, any number of uses.”

The total building area on the 1.28-acre property would be approximately 62,000 square feet, with an estimated 15,000 square feet being commercial space.

Approximately 90 parking spaces would be located in a lot behind the building, which will be broken up two breezeways allowing residents and shoppers walk from their vehicles to the front entrances facing West Third Street, though there is the potential to provide up to 146 parking spaces.

Walk 2 Campus has facilities in four university towns in four different states but King noted, “Farmville is a pretty special place to us. We started the business here…with the purchase of a single building and have grown the business…”

In a Thursday email to The Herald, King stated, “We're excited about the project. I think this parcel of land is very important to Farmville and we take that responsibility very seriously. The Newmans have run a high quality local business for several decades from the site, but now we're in a special position where the land is ready for its next purpose.”

King added, “I think the addition of commercial space for small businesses will help that end of downtown, while the residential aspect creates even more people living downtown and supporting the existing local businesses.

“We believe that each thoughtful and meaningful investment in a downtown corridor,” he continued, “strengthens the economic and architectural fabric of that corridor.”

Noting the design, Matthews told Town officials it is “traditional, in keeping with the architectural character that already exists (downtown).”

King told The Herald that he believes the architects have “demonstrated great vision in conceiving a new building with traditional architectural qualities that fit downtown Farmville. We were very pleased with the design.”

The apartments within the design were described as “fully functional” and will have washers, dryers and full kitchens.

“This is a purely private project…This is part of the tax rolls and we would actively compete for tenants,” King told council members. “…I do see students living here but I also think it would be a nice building for young professionals, faculty, staff.

Spates told council members they need to vote to refer the proposal to the Planning Commission for a report back to council and to authorize advertisement for a public hearing that would “allow this type of construction in a B-3 zone…We do allow it with Midtown Square so it's a matter of adding that use into the zoning ordinance and it would be done with a conditional use permit,” the town manager said.

The zoning amendment would add this use to the Business B-3 zone: “Mixed use commercial and residential provided that all residential be located on the second story of the building or above, with a conditional use permit.”

A zoning restriction limiting buildings in the B-3 district to no more than 45 feet in height would be deleted to accommodate the proposed 55 to 65-foot tall project.