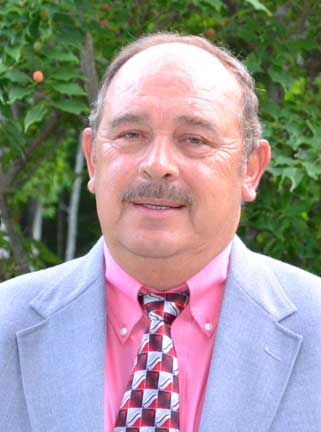 Announcing his candidacy for sheriff, Tyree offered, “If elected, I can and will make a difference in law enforcement in Bucking-ham County.”

He shared, “I am very familiar with the problems in Buckingham County concerning its citizens and merchants.” Tyree added, “I have dealt with the drug problem as a parent and also as a police officer.”

Explaining that he would have an Open Door Policy, stated, “I look forward to working with and for the citizens of the county.”

A native of neighboring Nel-son County, Tyree graduated from the Virginia State Police Academy in 1971; and, was sta-tioned in Buckingham.

In 1987, he was assigned to the State Police Narcotics Under-cover Unit. “While in the Narcot-ics Unit, I served in various parts of the state as an undercover po-lice officer,” stated Tyree. “In 1988, I was promoted to special agent with the VSP Bureau of Criminal Investigation.”

Noting that he attended nu-merous schools, seminars and workshops while with the VSP, Tyree highlighted some of what he described as his more signifi-cant credentials including schools on Laws of Arrest, Narcotics De-tection and Arrest, and Search and Seizure. Continuing, he added Arson School in Yorktown, VA; Bomb School in Virginia Beach; Advanced Homicide School; and the FBI School on Criminal Behavior in Quantico, VA.

During his career in law en-forcement, Tyree said he worked numerous break-in cases as well as grand larcenies in Bucking-ham.

After retiring from the Virginia State Police in 1995, Tyree worked for the Department of Corrections and attended the DOC Academy for Staff Devel-opment. His DOC duties focused on drug testing and detection.

Outlining his goals and objec-tives if elected, Tyree stated he would commit additional time and enforcement for drug investi-gation; and, seek state and federal funds for drug investigation and equipment.

He added that he would de-velop manuals and materials for staff development. Additionally, he said he would offer training and programs for the benefit of the community, law enforcement personnel, and support staff.

Tyree and his wife Jean have been an active part of the Buck-ingham community for 35 years and are members of Cedar Baptist Church.

Together, they raised five sons and were instrumental advocates for the renovation and expansion of Buckingham County High School and the second baseball field at Gene Dixon Park.

While his sons were young, Tyree worked with the Boy Scouts, coached youth league baseball for approximately 15 years, and served on the board for the Buckingham County Youth League for about five years.

Seeking the support of Buck-ingham voters, Tyree offered, “Together, we can and will make Buckingham a better and safer place to work and reside.”