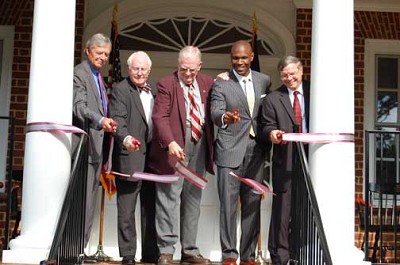 HAMPDEN-SYDNEY – The Founding Fathers were the quintessential “few good men” long before the Marines began the search.

Jefferson, Madison, Washington, et al, created the United States of America, first as an idea and then as a reality.

Lt. Gen. (Ret) Samuel V. Wilson believes Hampden-Sydney College and its Center For Leadership In The Public Interest, small though they are relative to the vastness of the world and its challenges, can play a key role in sustaining the Founding Fathers' creation while helping to forge a better world.

Speaking on Wednesday afternoon at the dedication of the remodeled and expanded leadership center that he conceived and which bears his name, the former H-SC president reflected on the theory of reputable historians that the average age of great civilizations is 200 years.

Which would not bode well for the United States of America.

“That means if we start our birthday count at 1776, then we are already deep in the bonus period,” said Wilson, who avoided mention of his name in connection with what he called the Center For Leadership. “We are also told that, by that second-century mark, erstwhile prosperous societies have tended to become slothful, soft and hedonistic and to lose social and political cohesion as self-interest begins to predominate over the interests of a people as a whole.

“Sound familiar?” the former Director of the Defense Intelligence Agency asked in a way that answered the question more effectively than a simple “Yes.”

“So the question for us now becomes: Will these United States of America go the way ancient Greece, the Roman Empire, the British Empire and others we might name-one more mighty skeleton buried in the sands of time. Or can we,” the former Deputy to the Director of the CIA continued, “as I used to tell my Russian colleagues during the Cold War, can we remain forever young and vibrant by drinking from the fountain of youth, which for us in America is the polling place, and be rejuvenated, getting a fresh start every four years?”

The threats to our surviving any deeper into “bonus time” are internal and external, he warned.

Can we meet them “or are we beginning to falter? Has Washington lost the bubble? If so, can we recover? Is the upcoming generation doomed to inherit the bitter wind that blows across our past mistakes? Is that shaking ground beneath our feet the silent sounds of rot and decay?” he wondered, eight days after a 5.8 earthquake rocked H-SC and the East Coast and within hours of an aftershock.

For Wilson, who patriotically lied about his age to enlist in World War II prior to Pearl Harbor, the “most ominous danger of them all is our acute poverty in leadership today. In all fields: government, business, church, sports, education/academe. News headlines tell us daily of egregious violations of moral principles and of public trust that undermine our confidence in both governmental and private institutions.”

Cue tapes, and cut to footage, of the debt-ceiling shall-we-not-dance 1-2-4 fandango as evidence.

“We have witnessed just this spring and summer a classic example in the political arena of narrow-minded, self-serving politicians,” Wilson said, channeling his inner John “Gimme Some Truth” Lennon, “on both sides of the aisle stubbornly seeking to serve their own partisan political aims and in the process bringing the entire country to the brink of economic disaster.”

Wilson harkened back to a philosopher from that once-great Greek civilization and placed him, to great purpose, in Washington, D.C. “Diogenes, with his lantern seeking to find an honest, morally courageous man who can see beyond his own selfish interests, would be,” Wilson said, “a very lonely and frustrated figure in Washington today.”

Nobody clamming up, if there's a pearl in the oyster for their person or party, and plenty of fresh selfish daily.

But Wilson, who hacked his way through Burmese jungle thicker than the Berlin Wall during World War II, found his faith undeterred.

“There is reason for hope,” he said, not speaking about leadership on the front porch of a center for leadership because he believes the cause is lost.

“I believe that little Hampden-Sydney College and others like us can make a difference in this situation even if our numbers are small. For if you list them, our founding fathers were also few in number,” said Wilson. “Take away eight to ten of them, beginning with Washington, Jefferson, Adams, Madison, Hamilton and Franklin, and we might never have become a sovereign nation.

“Rather, we might be more like Canada or an assorted number of smaller nation-states resembling those of South America. Thus, we would observe that it was the dedication and the quality of leaders responding to desperate need at the time of our revolution, not their numbers, that made the difference,” he said. “Armed with this knowledge, we are undeterred by considerations of size.”

Wilson believes that the college is “a good place to start” filling the nation's leadership void, and has already proven its mettle throughout the nation's history.

“The history and rich traditions of this venerable college put wind in our sails. As many of you are aware, sons of Hampden-Sydney have played a stellar role over the years in keeping our ship of state on a steady course,” he noted, listing many governors, congressmen, ambassadors and judges, as well as corporate and community leaders, and a U.S. president. All of them have “passed through the college's gates. In each instance, their careers were shaped by the rich liberal arts curriculum and the demanding honor code of this institution,” he said.

The Wilson Center for Leadership in the Public Interest describes itself on its website as developing “effective and ethical leaders who link theory with principled action, and understand the challenges confronting the United States and the world.”

In Wilson's own words on Wednesday, “what we are celebrating here today has the potential to become a profoundly important undertaking.”

Creation of such a leadership center on campus was first proposed by Wilson to then-H-SC president Ralph Rossum in the spring of 1992. Rossum supported the idea but within months events unfolded which found Wilson, himself, as president of the college. With so many responsibilities, creation of the leadership center fell on to the shoulders of Dr. David Marion, long-time H-SC professor.

“Time will not permit me to list the many achievements in the College's Leadership and Public Service programs for which this individual bears direct responsibility. Suffice it to say that the Wilson Center for Leadership in the Public Interest,” Wilson said, mentioning the full name of the center for the first and only time on Wednesday, and then to praise someone else, “would not exist, and we would not be gathered here today, but for the organizational skill, creative imagination and intellectual brilliance of this remarkable man.”

Tom Allen, chairman of the college's board of trustees, said H-SC owes “a very, very deep debt” to Dr. Marion and he noted the center's role “in educating and preparing our young men to be the leaders of our nation.”

There is “no easy way,” H-SC president Dr. Chris Howard said Wednesday, “to capture the essence of the Wilson Center and all that it does for our students, and indeed for our college. From the beginning, the goal of the Wilson Center has been to create leadership and public affairs programs that would be competitive with the best of these programs in the country.

Most human beings, Gen. Wilson observed, as he brought his address to a close, “seek a larger cause, a noble undertaking, larger and more important than our own selfish interests, in which we can immerse ourselves, where we can find true meaning and a sense of fulfillment in our lives.

“So let an old man, who will be well into his middle nineties when the currently matriculating H-SC class graduates,” said Wilson, who is retiring from fulltime teaching at the college, “let this old, old man tell you who seek a cause worthy of serious effort and sacrifice, that the cause is here on this hill.

“As my old first sergeant many years ago used to say to me when he had just laid a weight observation on me: 'Think about, Sir. Think about it.

A weighty observation from someone whose life has shown him to be a one-man few good men in American history.

Before, during and after Wednesday's dedication ceremony, Gen. Wilson deflected any hint of congratulatory praise by declaring that the event is about the celebration of an idea, not an individual.

Gen. Wilson had a brilliant idea that has become reality through the dedication of many people.

But without the idea there would be nothing.