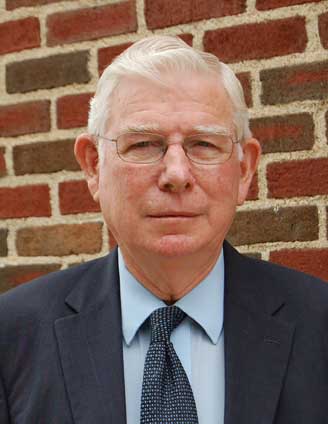 BUCKINGHAM – For Bill Talbert, serving on the Buckingham County Board of Supervisors is a lot like his auctioneering-he knows he's got to be knowledgeable about the subject at hand, communicate effectively, and get the job done.

After 37 years as the owner and auctioneer of Francisco Auction Company, Talbert has the auctioneering part covered. However, to continue as a member of the board of supervisors, he needs to be re-elected on November 8, which is why he is announcing his candidacy.

Talbert is seeking his third term as supervisor for District 3, which includes the Curdsville and New Store precincts.

Prior to becoming a supervisor, Talbert served on the county's planning commission for four years and was a member of the board of zoning appeals for six years. Both offered insight and knowledge about local government, he noted.

Likewise, Talbert utilizes his previous work experience to assist him in his role of supervisor. As an example, he shared that his 19 years as a mill worker and carpenter with J. E. Sears and Company along with over 24 years with the United States Department of Interior at Appomattox Court House National Historical Park definitely came into play when assessing the pros and cons of renovating the schools on Route 20.

Crediting Buckingham County Public Schools for providing his son Allen, a professor at Purdue University, with a solid foundation on which to build a noteworthy and rewarding career, Talbert stressed the importance of offering area youth the best education possible.

He said the board's decision to fund the almost $25 million project to renovate and expand the two schools on Route 20 will result in state-of-the art lower and upper elementary schools. According to Talbert, the project offers a prime example of improving school facilities in a manner that is affordable to the county.

Moreover, Talbert said the recent construction of a new bus garage and maintenance project was long overdue. The new facility not only provides employees with a safer and enclosed area for repairing and maintaining the bus fleet but also offers a fueling station for all county vehicles.

Talbert is currently serving his second term as chairman of the board of supervisors. Additionally, he is the board's representative on the Crossroads Services Board and serves on the board that oversees the Comprehensive Services Act for At Risk Youth and Families.

Talbert shared that one of his biggest disappointments as a supervisor occurred when a manufacturer of fiberglass swimming pools decided it would not locate in the industrial park as planned. He reminded that the decision was prompted by a death in that family-owned and operated business.

Conversely, Talbert, with scissors in hand, was part of the ribbon-cutting ceremony at Dominion Virginia Power's newest power station, Bear Garden, on August 19.

At that ceremony, he graciously thanked Dominion for coming to Buckingham and for providing approximately $1 million in annual revenue to the county. Those funds, noted Talbert, will be used to help fund the school project on Route 20.

Reviewing other capital projects undertaken by the board during his tenure, Talbert noted that construction of the county's new water plant and the expansion of the county administration facility are underway as are plans for an upgrade of the sewage treatment plant.

As far as upcoming challenges, Talbert said the county will be facing a real estate reassessment that will be reflective of the downtrend in the housing market. Moreover, he said the land-use issue needs to be revisited.

“We must keep spending as level as possible to keep tax rates down,” stressed Talbert.

Noting increasing state and federal mandates placed on localities coupled with cuts in funding, Talbert shared that he is troubled by the lack of funding for surfacing and paving roads-especially when school buses must travel those unpaved roads.

Talbert shared that he would like to have the opportunity to work through those challenges. Moreover, he said he would like to be able to share the knowledge and experience he has gained as a supervisor with the board's newcomers.

“I'd like to thank my constituents for their support over the last eight years,” stated Talbert, “I've tried to be as accommodating as possible.”

He added that if re-elected he would continue to seek their help and input in making decisions that benefit the district and the county. Talbert offered, “I'm a supervisor for everybody-whether they voted for me or not.”

Stressing the need for individual supervisors to represent not only their constituents but also the county in general, Talbert offered, “As a board, we need to work together for the best of the county.”

He concluded, “Working together, we can ensure that Buckingham County continues to be a great place to live, work, and raise families.”

For the last 62 years, Talbert has been a member of Chestnut Grove Baptist Church. He is a past master of Buckingham Masonic Lodge 242, where he has been a member for 48 years. Additionally, he served as Deputy District Grand Master of Masonic District 17, which includes lodges in Buckingham, Albemarle and Fluvanna counties.

Talbert and his wife Helen have one son, Dr. Allen Brian Talbert; a daughter-in-law, Kim; and two grandsons.