Old Photos Span The Past 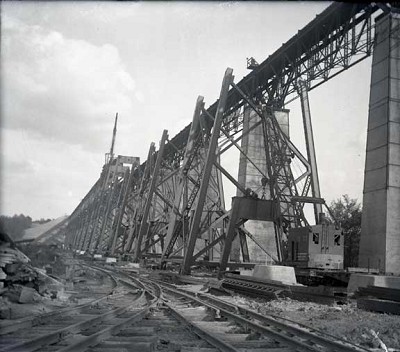 PRINCE EDWARD – It seems like you can find just about anything on eBay these days.

“One day (High Bridge Park Manager) Eric (Hougland) sent me an email saying that he was contacted by someone that these glass…photos…of High Bridge were available on eBay,” Bob Flippen recounted. “And Eric knew that I'm really into eBay so I went and searched, but I was just thinking that it was gonna be the same old Timothy O'Sullivan reprints from 1865 after the war that you see all the time on eBay…After I had to raise my lower mandible off the floor, these were actual four inch by five inch glass negatives of the steel viaduct under construction in 1913 and 14-unknown views.”

High Bridge, the centerpiece of a multiuse 31-mile trail, has it's own mystique. It's history dates to the 1850s and the site even played a role in the waning days of the Civil War. Confederate forces attempted to burn-and to some degree succeeded- the structure to slow advancing Union soldiers.

But that bridge, supported by a series of brick piers some of which are now gone, went out of service in 1914, replaced by the scenic steel structure locals have long gazed at from a distance over the rural landscape. It is, relatively, in the middle of nowhere-a half a mile span of neither town nor community.

The last train to traverse the tracks over the bridge sadly rolled through Farmville on July 15, 2005 and, with rails and crossties now gone, a new trail opened tracking a lot of visitor attention.

Work on the bridge itself is still continuing and it is slated to be open for traffic sometime next spring.

But travel back in time to 1914 when the last bridge was being built. When steam locomotives huffed and puffed heavy loads of dirt on the steel lines and before name brand sneakers, DVDs, jump drives and America sent a man to the moon.

When engineers had to do creative things with what now seems archaic equipment.

If a picture says a thousand words, the recent discovery is pushing novel territory.

The eBay on-line auctions, Flippen recounted, basically consisted of a number for the negative, the name of the inscription on each envelope and a date, and a generalized description of High Bridge and how it has become a state park and a trail.

As it turns out, Willis W. Vail, the resident engineer of the project, took photographs of the replacement bridge in its construction process.

“Absolutely,” Flippen says, when asked if it were one of the most extraordinary finds he has run across on eBay. “This is probably the best High Bridge find I've made since the original contract to build the original High Bridge in 1951 signed by Francis Carr and Christian Ehrman. They were the contractors who built the wooden superstructure over the brick pylons…”

He still has the original document with the hand-written specifications.

He did just that, working to secure as many of the artifacts as possible-first through auction purchases and then working with the seller. His goal, with the support of the Friends of High Bridge, is that they will go to the High Bridge Trail State Park.

“Hopefully, the powers that be will see this and recognize that these photographs combined with the engineering news article of September…10, 1914 that details the construction of the steel viaduct, that together they will complement themselves to create a fascinating exhibit for the visitor's center which, hopefully, may be built just in time for the 100th anniversary of the bridge,” Flippen said.

Jo Smith, a local historian on the subject, has long been fascinated with the bridge and has written the booklet A History of High Bridge. She had located the engineering article (which she had passed onto Flippen) some years ago and recognized the photos.

“…I was just overwhelmed,” she said. “I knew exactly when he had sent me a couple…where they had come from and, of course, he did too at that point. Because I had shared that article with him way back when I first started my research-located that engineering news…”

One thing she is particularly interested in among the collection is the one that depicts the mules and scoops used in building the abutment.

“Because I have in my booklet the names of people who were involved in that,” she says. “Some were…just teenagers that were local farmers and they used their mules and their scoops to help build that abutment, so that one was really something that interests me. And the cleared land that was down there-he shared with me one this week that…if you're on the what I call the western end…the Farmville end of the bridge, you can actually see the Smith's house and one of the tobacco barns on the place.”

That house, she believes, was built about 1912.

It also shows an open land below the bridge, now forested with trees stretching to the sky.

She would later offer, “Did I say wow?”

“What have I learned? Oh my gosh. How massive a project it was,” Flippen said. “The earth removal alone to build the approaches for the new bridge, they had train car dump loads-and you see pictures of them in these-that the pedestals that you see where the steel sits upon is just the tip of an iceberg showing. The average pedestal is over 20 feet tall. The ones by the river and by the bridge abutments are 32 feet tall and, once they were cast, the dirt was piled up all around it.”

Flippen had a description of the work at the site from the copy of the engineering magazine, but the photographs and the written work re-enforce one another in the magnanimity of the project and how it was done.

There was 13 months of preparation work before the steel was placed. The half a mile of the steel bridge or 2,400 feet started the first week of April 1914, with completion in the first week of June. Traffic was diverted from the old to the new bridge on June 22, 1914.

The photos detail a steam engine used on site, the manufacture of pylons, and that a steam-powered dredge was used in the Appomattox River to collect sand for concrete produced on site. The dredge was named the “Titanic,” perhaps a tribute to the real Titanic that sank when it hit an iceberg in the Atlantic Ocean in 1912.

“And in these glass negatives is probably the only known picture of both bridges standing side by side with the tracks still intact,” Flippen said.

Almost as soon as the new bridge was built, the steel from the old bridge was taken down-the end of an era, and the beginning of another.

In all, Flippen has secured about 70-75 of the glass negatives-although he speculates there were (going by the negative numbers) about 120. And while he has much of the collection, others are now detached from the whole, thanks to other eBay buyers.

Vail was quite detailed in his work. Each of the glass negative sleeves specify a negative number, date the picture was taken, time of day, weather, lens aperture for the camera and a brief description of the photo.

“I think it's a wonderful thing we've got in somebody's possession in this area,” Ms. Smith said. “Not to have 'em distributed somewhere where it wouldn't be as meaningful.”

Hougland offered, “…What a find, I guess, to be able to have some insight into how the construction happened on the bridge. Some of those photos of the work camp with the tar paper shacks and things…I think it's just a tremendous resource to have an idea how it all happened. I mean, we haven't been able to find very much documentation about the construction of it so to have that visual story is pretty meaningful.”

Houghland noted that they are working with Prince Edward County to have an exhibit about the time of the opening of the bridge that would be displayed in the Visitor's Center in Farmville. They could show some of the photos as part of the exhibit.

“But even the glass negatives and the sleeves that they're in are a part of history,” Houghland said.

Flippen believes that there is a mysticism involved around High Bridge. He noted that it carries two major themes of American history – railroad transportation and American Civil War. It's somewhat mystical because of its seclusion.

“…The entire trail's important, but the truth of it is…High Bridge is the iconic central point of the park and…we're real anxious to get it open and available for use,” Hougland said.

Houghland points to a lot of things that make it special-the view, history associated with it – when the original bridge was constructed, the Civil War history, and transportation history.

“But, probably the one thing is just the – size just seems like too little of a word. I mean the immensity of it,” he said. “There's not too many places that are gonna boast a half a mile long bridge that's 160 feet high that you can cross as a pedestrian, a bicyclist or walking your horse across.”

And now, thanks to eBay and some watchful eyes and a good tip, a chunk of its history is traveling home, too.