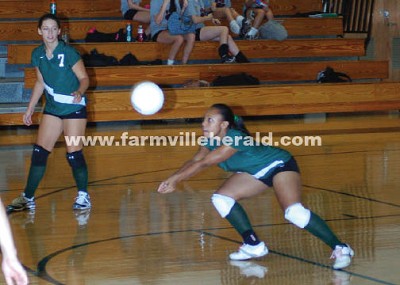 “She served us off the court two games in a row,” said BCHS head coach Ethan Abruzzo. “I think we were a little flat, and once they started that big run, it snowballed on us.”

Buckingham was actually playing Nottoway point-for-point in the first set. The Lady Knights were up 11-10 following a kill by Katelyn Gough to gain the serve, but after losing the next point, they wouldn't gain the serve for the remainder of the set.

Dooley rattled off 14-straight points to turn what was a competitive set into a rout. Two Buckingham time outs didn't help.

“You call time outs, you change things up, but sometimes, a server gets hot, and when that happens, it seems no matter what the team does, it's hard to reverse the streak. Balls that look like good kills go out of bounds by inches. Sometimes, it's a hard thing to snap out of.”

Nottoway was having little trouble in the second set when Dooley rotated around again. The Lady Knights trailed 12-6, but had chipped away at a 10-2 deficit. Then, Dooley put together another run. Up 13-6, Nottoway scored the next 11 points to take a 24-6 lead. Dooley's set-point serve went into the net. No matter. By then, the damage was more than done.

Buckingham battled back in the third set, and despite trailing most of the way, managed to climb back into contention late.

Trailing 20-13, Buckingham chopped away at Nottoway's lead, and eventually pulled to within a point a 24-23, before Nottoway won match point.

“I think we were still shell-shocked by her from the first set,” said Abruzzo of Dooley.

Buckingham's undoing in the third set was more from its own side of the net. Four consecutive times when BCHS gained the serve, the Lady Knights had a service error.

“We broke Dooley's serve twice, but we couldn't get our serve in,” said Abruzzo. “When you close the game down like we did, you have to point to that stretch. We played better, but to score a point on a serve, you first have to get the ball in play.”

Abruzzo acknowledged that Nottoway was substituting liberally toward the end, but he did believe that the Lady Knights were also playing better.

“They don't have much drop-off in their bench,” said Abruzzo. “Everyone is a capable player. I was hoping we could get that one as a confidence builder. The girls don't realize how the opponent is substituting, so I was thinking that if we could get the win, maybe it would lift up our confidence to the point we realized we could play with these girls and force a tiebreaker.”

The schedule will get no easier for the Lady Knights. On Monday, BCHS will travel to Randolph-Henry, before returning home on Wednesday to face Central of Lunenburg. Next Thursday, Buckingham will step out of district to host Prince Edward.

“We've looked better than we did tonight,” said Abruzzo. “Our seniors have got to step up, and we've got to stop making unforced errors.

“We're not going to get a break. This district is tougher than it's been in a long, time, but I still feel we're competitive with any team in the James River. We've just got to cut down on the unforced errors.”