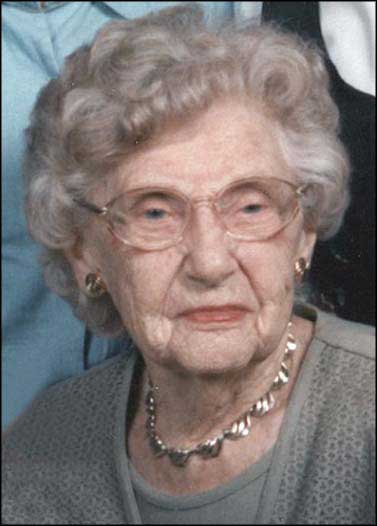 She was a long-time employee of Southside Community Hospital in Farmville. She retired after working at Longwood College. She had been a resident of The Woodland since 1999 and was lovingly cared for by the staff there who admired her feisty spirit.

Mrs. McClenny, the eldest member of Pisgah Baptist Church in Rice, was an active member from the age of nine. She served as a director of the Woman's Missionary Union of the church for over ten years, as membership clerk for twenty years and taught Sunday school classes there beginning at the age of sixteen. She initiated the policy of enrolling newborn babies of church members on a special roll of the church called the “Cradle Roll”. In 1994 she was presented a special citation diploma by the Southern Baptist Convention for completing 500 hours of study in the area of Christian development. This special diploma is the highest award presented by that organization for individual study. At that time she was also awarded a special plaque by Pisgah Baptist Church for her faithful Christian service throughout the years, in various areas of the work of the church.

She was an active member of the Farmville Woman's Club, the Rice Fire Department Ladies Auxiliary and the Judith Randolph/Longwood Chapter of the Daughters of the American Revolution. Through her work in the Rice Garden Club Mrs. McClenny participated in the beautification of the Town of Rice by planting roses throughout the village. In addition she assisted in organizing the Rice Junior Garden Club.

The family will receive friends Friday evening from 7 to 8 p.m. at the Doyne-Burger-Davis Funeral Home.

A funeral service will be conducted 2 p.m. Saturday at the Pisgah Baptist Church, Rice. Interment will be in the church cemetery. The Rev. Earl Wallace will officiate.

Doyne-Burger-Davis Funeral Home, Farmville, is in charge of the arrangements.