Fuqua Cruises To Win Over Broadwater 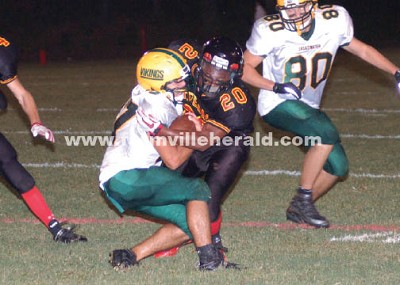 FARMVILLE – It probably won't score much in terms of style points, but the Fuqua School football team played a solid enough game to remain undefeated on the season with a 37-16 victory over visiting Broadwater Academy last Friday night at Gilmer Field.

The Falcons got off to a quick start, built a good sized lead and cruised to the 21-point victory.

“They gave us a couple of short fields that we were able to take advantage of,” said FS head coach Lewis “Skeeter” Fore. “I do think we got into one of those situations where it came kind of easy early on, and we got complacent in the second half. They didn't quit and I think kind of outplayed us in the second half.”

Senior Larry Haskins ended Broadwater's opening drive with an interception at the Fuqua 26-yard-line. It didn't take long for the Falcons to capitalize. On the Falcons' first play from scrimmage, FS junior quarterback Carter Cunningham hit Haskins for a 63-yard pass to put Fuqua into scoring position. Haskins finished the two-play drive with a 13-yard touchdown run to put the Falcons up 6-0.

Fuqua senior tailback Charles Williams then got in on the act in with 2:42 remaining in the first quarter to cap a three-play 33-yard drive with a 24-yard touchdown run to put the Falcons up 12-0.

An interception and big return by Matthew McKay put the Falcons in scoring position again, and Williams completed the short drive on an option pitch from Cunningham to put the Falcons up 18-0. Fuqua had trouble all night with extra point attempts of either the one-point or two-point variety.

Things settled down for both teams in the second quarter. The only score came on a Williams 61-yard touchdown late in the period on what was a one-play drive. Fuqua held a 24-0 lead at halftime, and extended it to 31-0 at the 8:46 mark in the third quarter on a Williams 26-yard touchdown run that ended with an athletic tackle-avoiding dive into the end zone from five yards out.

Sam Holland put the Vikings on the board with 3:56 left in the third quarter on a five-yard touchdown keeper on fourth-and-inches, and a two-point conversion pass cut Fuqua's lead to 31-8. With 4:40 left, Michael Steelaman scored on a 13-yard touchdown and converted the two-point conversion to cut the Falcons' lead to 31-16. Fuqua closed the door on any thoughts of a late rally by Broadwater, and added a late touchdown by Haskins on a 30-yard run with 1:08 remaining to bring the game to its final score.

“You have to hand it to them,” said Fore. “They didn't quit – especially considering their numbers were pretty low. They're obviously well-coached and well-conditioned.

“We've really got to work hard and improve across the board, though. Our schedule is going to kick up big time soon, and we're going to have to be ready to play.”

Williams led the Falcons on the ground with nine rushes for 148 yards and five catches for 44 yards for a combined total of 192 all-purpose yards and four touchdowns. Haskins was almost as impressive with 59 yards and two touchdowns on 12 carries, and two catches for 86 yards.

Cunningham was 10-14 passing for 211 yards. Fuqua gained a total of 353 yards combined on the evening on just 35 offensive plays.

Fuqua will travel to Hampton Roads Academy on Friday for a 7 p.m. contest.

BCHS Overpowers Fluvanna In Battle Of The Bridge