Dukes Push Through Slow Start To Rally Past Eagles 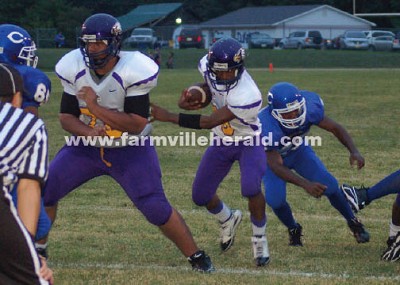 In football, patience is not a virtue.

The Dukes outlasted a good first half by the Eagles, and took advantage of two PE fumbles at the beginning of each half and wore their guests down in the fourth quarter to get their first victory on the season.

“We've got to kick this habit of coming out slow in the first half,” said Sutton. “That halftime speech is getting old. Slow starts are going to hurt us down the road. We've got to come out and play strong for four quarters. Maybe I should give my halftime speech before the game.”

Prince Edward (0-2) spotted Cumberland six points on the Eagles' first possession. After forcing a three-and-out, PE gave the ball back to CHS on the three-yard-line. After two attempts up the middle, senior quarterback Devonta Booker put the Dukes on the board with a run around the right side just four minutes into the contest.

The Eagles didn't allow the bit of misfortune to overwhelm them. After the PE defense forced a three-and-out, the Eagles offense put together a drive that ended with a one yard touchdown by quarterback Davon Adams with 2:18 left in the first quarter.

Cumberland (1-0) answered rather quickly, and scored with 33.5 seconds remaining in the quarter on a five-yard touchdown pass from Booker to Rashawn Sims.

Prince Edward took its only lead with 7:03 remaining in the half on a nine-yard touchdown run by Adams. Bobby Burke's extra point put the Eagles ahead 13-12.

Prince Edward forced three Cumberland turnovers in the first half, including two second quarter fumbles by Booker, but could only manage the two scores.

The third quarter started much like the first quarter did for Prince Edward, with the Eagles fumbling at the PE 16-yard-line.

Justus Dowdy capped the short drive with 8:31 left in the third quarter on a three-yard touchdown run.

Cumberland dominated time of possession in the third, and the Dukes' new “I” formation started to wear down the Eagles. Dowdy scored his second touchdown on the evening with a two-yard run to cap the long drive.

“That was the key drive for us,” said Sutton. “I think that's where our depth advantage paid off. It was muggy out here, and we had some cramps, but we were able to rotate in our linemen to keep them fresh for the second half. KeRon Langhorne led us down the field at fullback, and then came back on defense and made some plays. He did some things that won't show up statistically, but his play really stood out for me.”

“We need more in the red zone,” said Ford. “We just didn't execute when we had a short field. That's something that's got to change. It killed us tonight.”

Adams was 6-13 passing for 89 yards, and rushed five times for 41 yards and two scores for the Eagles. Eddins rushed seven times for 100 yards, while Lockett rushed for 97 yards on eight carries. He also had two catches for 59 yards. Marquis Fitzgerald had two grabs for 33 yards.

Dowdy rushed for 64 yards and two touchdowns on 14 attempts. Dione Booker had seven carries for 46 yards.

Sims had three catches for 39 yards and a touchdown, before leaving the game with an injury. Bo Winbush led the CHS receiving corps with two catches for 40 yards.

“We'll have to see about Rashawn,” said Sutton about the knee injury that forced Sims from the game. “I don't want to speculate either way, but if it's not too serious, we're not going to hurry him back until he's able to run and cut like nothing happened.”

Prince Edward will travel to Buckingham on Friday night for a 7 p.m. non-district contest.

“It doesn't get any easier,” said Ford. “We have a tough schedule out-of-district, but we've got to worry about us and getting better for when we get into our district schedule. If we get to where we can put two halves together, I feel we have the athletes to play with anybody.”

Cumberland will also see an up-tick in its schedule this Friday. The Dukes will travel to Dogwood District representative Appomattox, which has gone 1-1 against JRD competition so far, losing at Buckingham two weeks ago and defeating Nottoway last week.

“We're going to have to stop that option and run,” said Sutton of the Raiders. “It's going to be a battle, and hopefully we'll be able to build on what we did in the second half here and apply it on Friday night.”