AYP Requirements Are Failing Our Students And Schools 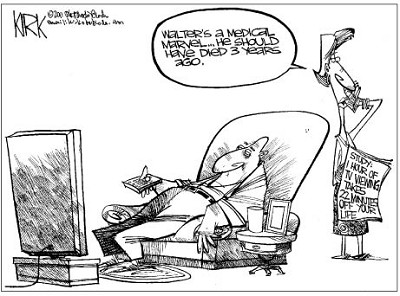 Any test requiring a score of 100 percent as the only passing grade is an utter, abject failure.

Unfortunately, No Child Left Behind does just that.

No, the program's Adequate Yearly Progress (AYP) component doesn't require every student to score a 100 on state tests but it's going to demand 100 percent passage by every student in every school. And its current incremental passage demands on the way to 100 percent are equally unrealistic and damaging.

Not only are children left behind, but entire schools and school systems are going to be left behind.

The federal program's AYP provision requires that by the year 2014 100 percent of a school's students must pass state exams. If not-if just one student out of the entire student body doesn't pass-then the entire school is officially declared not to have achieved Adequate Yearly Progress.

The latest AYP results this year would seem to categorize more than 60 percent of Virginia's public schools to be failures.

A 100 percent passage requirement is not based on anything of this Earth.

Not every leaf falls off every tree but it is still autumn.

Every snowflake looks different but it's winter nevertheless.

The sun rises at 365 different times every year but it's morning just the same.

Not even the best batters in Major League Baseball history get hits every at-bat. Ted Williams got a base hit 40 percent of the time in just one season-.406 in 1941-and nobody's done it again in 70 years. A hit 100 percent of the time? It won't ever happen over the course of a full season of at-bats. But there have still been American and National League batting champions every year. And many of them are in the Hall Of Fame.

The AYP provisions set a false, phony finish line. If it were a joke it would be in poor taste, but it is not and that makes it worse.
<br />What if NASCAR took the same approach-races in which every driver finishes every lap are the only races considered legitimate, the only races to achieve Adequate Yearly Progress toward the season's points championship?

A better comparison to show the rotten logic of AYP is if NASCAR declared that for a race's results to count toward the season championship every driver must cross the finish line at the same time-all 40-plus drivers taking the checkered flag together.

That would be insane and self-destructive toward NASCAR's aims and ambitions, also counter to any notion of fair play, and of course NASCAR would never do such a thing.

But this nation is doing something very much like it to our public schools with the '100 percent or else' requirement. Just as it has been doing each year as the program incrementally approaches the 100 percent passage requirement.

In the meantime, in newspapers around the country, including this one, there are headlines-accurate headlines-announcing that School A or School B did not make its AYP and the next thing you know the public believes its teachers and students are failures, that education in their community is substandard.

Those headlines are factual-the schools did not achieve their AYP requirement-but the AYP mandate projects something that is very much less than the truth about those schools.

Just take a look at Virginia and its public schools, including Buckingham, Cumberland and Prince Edward. Governor Bob McDonnell did and he wrote these words to Arne Duncan, U.S. Secretary of Education: “When an accountability model-regardless of its former utility and the good intentions of its designers-identifies better than six out of every ten Virginia schools as failing, it is time to go review the metrics.

“A model that increasingly misidentifies schools as low performing and confuses the public about the quality of their schools does not advance the cause of reform and accountability…The goals are good, but the measurements, bureaucracy, and reporting need overhaul.

“Benchmarks that jump 5-6 points every year based on a rigid formula are not capable of capturing the progress of students in schools with already-high pass rates. In these schools, the ground left to be won is occupied by the most challenging students. An accountability model that focuses on student growth would recognize subtle, but significant, gains in these schools and not leave communities wondering how a school in which achievement actually increased could be judged as failing,” Governor McDonnell writes.

Achievement is not regarded as failure, except in the illogical out-of-this-world of AYP.

Not everybody's stride is the same, but all steps in the right direction should be encouraged and recognized as the important progress they truly are.

AYP needs to be called into the pits for a new engine before anyone thinks of putting a checkered flag back in the program's hands.

The only thing that is failing is the AYP program itself.

Remember We Are All Neighbors