All Signs Point Toward Farmers 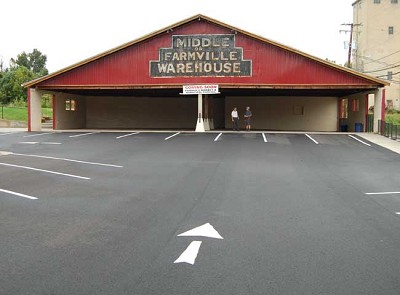 FARMVILLE – Town Council has unequivocally affirmed that the new Farmers Market means what it says.

Farmers, first and foremost, with other activities when farmers aren't using the North Street facility.

“The market is pretty much basically complete now, with the exception of the property committee making the recommendations on how we're going to control the use of it,” Farmville Town Manager Gerald Spates said during last week's September monthly meeting. “…I guess it's everybody's intention to allow the Farmers Market to use it and work out uses for other times when the Farmers Market's not using it.”

Spates advised that the day is fast approaching when farmers will move from the Farmville Train Station and begin selling produce at the facility named for just that activity.

“It's not going to take too much longer before we'll be ready to open up,” Spates said.

But there are issues to be dealt with-use of the facility when farmers aren't there selling what they have grown and raised, from beef to beets.

“We need to decide what you're going to do about parking during the week, which I think is going to be a real issue if we don't address it up front,” Spates warned, adding, “We're having a lot of requests. We've got a lot of people that want to use it.”

Before those non-Farmers Market uses are decided upon, council member Dr. Edward I. Gordon made certain the Town had not shifted from its farmers first policy toward the building adjacent to High Bridge Trail.

Dr. Gordon did so to quash misinformation circulating in the community which had some questioning that priority.

Fellow council member Sally Thompson has had similar conversations and said that “in talking to people Saturday down at the Farmers Market we discussed this…and they would certainly have Saturday use of the Farmers Market, just as you all always have. The rest of the time it will be used probably for other things. As Gerry said, we have a lot of requests, a lot of people have suggested things they want to have at the Farmers Market and this is also not just for the farmers but it is for the people in Farmville…I think we've got a wonderful facility and I think we'll make good use of it.”

Which prompted Dr. Gordon to say that, “I think the conception that had gotten out there was that our priority wasn't for the farmers and what I stated was, it was.”

“And I think that once I stated that the sigh of relief I saw” in the person with whom he was speaking “was huge…But we have always thought farmers first and that other thing would of course take place.”

Farmers are eagerly waiting to use the facility and a Buckingham farmer expressed both enthusiasm and gratitude during the public comment period at the outset of the meeting.

“I'm here to say thank you very much for your work on the Farmers Market in Farmville,” Dillwyn resident Sam Goin told council. “I am very excited about it. I am a vendor at the Farmers Market. I am owner of Goin Family Farm llc…I just wanted to let you know there are a lot of people that are really waiting to use the (new) Farmers Market, so I want you to know-a great big thank you to all of you.”

That thanks was returned.

“Thank you,” Mayor Sydnor C. Newman replied, “for your comments.”

Among other action during its September monthly meeting, Town Council:

Approved a conditional use permit for a Bojangles Restaurant to be constructed at 1503 South Main. The hours of operation, according to Spates, will be 5:30 a.m. to 10:30 p.m., Monday through Sunday.

Approved a conditional use permit to construct a State Farm Agency Office at the corner of Milnwood and South Main Street.

Reappointed Ms. Thompson as Town Council's representative on the R. R. Moton Museum's board of directors.

Referred an issue involving a Town alley to Town Council's property committee, council acting on a citizen's complaint regarding use of the alley.

Appointed Town Clerk Lisa Hricko as Title IV Equal Opportunity Counselor to provide advice for Town employees, or other individuals, regarding their rights under the equal opportunity policy. Ms. Hricko, who recently obtained her Master's Degree, has received training from the Virginia Municipal League and the Virginia Municipal Clerks Association in this area.

Adopted a resolution proclaiming Monday, October 24 as Food Day, as requested by the Southside Virginia Chapter of the Holistic Moms Network, to bring attention to the issues of obesity, supporting sustainable farming, and making real food available to everyone.

Approved partial closure of Hill Street on Saturday, September 17 from noon to 5 p.m. for a celebration of the annual Farmville All Stars Reunion.

Adopted a revised “Procurement Policy” for the Town because the written policy had not been updated since 1988. The Town mirrors the Virginia Procurement Act except on purchasing thresholds. The Act, for example, considers a small purchase as “expected to exceed $30,000,” whereas the Town breaks it down to $500, $1,000, and greater than $15,000. On larger purchases or when expending grant funds, the Town follows the state's Procurement Act.