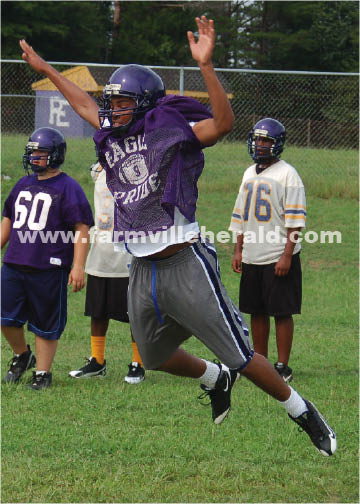 August 1 signaled in the start of Fall Sports Practice for high schools across the state of Virginia. Coaches polished their whistles, while players were reminded that they had muscles they had forgotten about during the ever-so-brief summer break.

Fuqua's volleyball programs, which do not officially start practice until later in the month, held an in-house camp for the third-consecutive season. The coaching staff from the Appalachian State University volleyball program conducted the camp for around 35 girls in the three programs from middle school to varsity.

At Prince Edward, volleyball practice began on Monday. Conditioning was the focal point for much of the first two days. According to head coach Bruce Bogese, volleyballs weren't even brought out on Monday as around 26 athletes whipped themselves back into shape and hopefully into a spot on either the varsity or junior varsity squads.

Prince Edward's football camp started its first official practice under new head coach James Ford. Ford said that numbers for the varsity and junior varsity were approaching 50. A little over 30 were wearing purple varsity practice jerseys on Tuesday. He expects the numbers to increase – especially for the junior varsity by the time school starts next week.