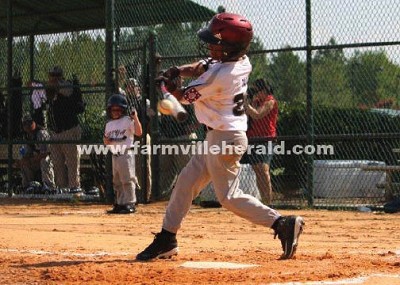 Though extended a day by a pesky rainstorm, the Prince Edward Farmville Youth Association's stay in the Dixie Youth Baseball Regional Coach-Pitch Tournament was a short one.

The PEFYA All-Stars went 0-2 in the tournament held in Florence, SC, losing to North Carolina champion Stanley 18-1, and after rain pushed back their elimination game to Monday, PE Farmville fell 13-7 to Pike County, Georgia.

“Stanley put it on us really bad,” said PEFYA manager Johnny Holman. “We didn't play as well as we were capable, which against a team like that, made for a pretty bad game. We played a lot better on Monday against Georgia, but their hits were into the gaps, and we hit to their gloves.”

Though it was a short stay for the PEFYA All-Stars, who was one of three teams from Virginia to make it to the 16-team, double-elimination tournament, it was still educational.

“We had fun,” said Holman. “It's a huge experience for all involved, and something they may never be lucky enough to experience again. We didn't just go down there and sit in a hotel in between games, we went to the movies, Chuck E Cheese's. We really wanted to give them something positive to remember.”

The trip was a learning experience for all involved, even the coaches learned some things that can help PEFYA be more competitive down the road.

“There are some things teams in the warm-weather states do that we can't. Some play ball 11 months out of the year, and many are pulling from larger areas. I did notice that we had a lot of young eight-year-olds, while other teams had kids that fell just on the right side of the deadline to play coach-pitch instead of minors.

“One thing we can do is to allow eight-year-olds who play up in the minors during the regular-season but don't make All-Stars, the opportunity to play on the coach-pitch All-Stars team. Many of the other teams that were in the tournament did that, and I think it really gave them an advantage.”

There were other ideas, but the drawing board can wait a few days.

“The biggest thing was that we had fun and got to represent the community. A community that really supported us as we raised funds for the trip.”

Holman said that approximately $15,000 was raised in the week leading up to the Regional Tournament.

“It says a lot about how great this community is. Without their support, I don't know if it would've happened.

“I'm really proud of my guys. They played to win and never gave up the fight.”