Murdock To Run For PE Treasurer 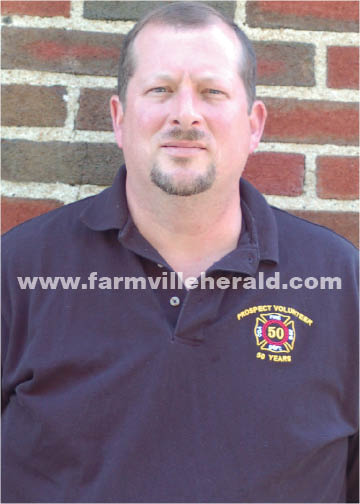 PRINCE EDWARD – Ben Murdock, treasurer for the Prospect Volunteer Fire Department, will run as an independent candidate for County treasurer this November-focusing on service, education and experience.

Murdock moved from the Roanoke area to work at the hospital in 1986, has two grown children and a six-year-old. His wife Jackie was selected the Nurse of the Year at Centra Southside Community Hospital.

Murdock, a graduate of Northside High School in Roanoke, also graduated in 1984 from Virginia Tech (noting that he comes from a long line of Hokies) with a degree in business (majoring in accounting), is in his 18th year as a member of the Prospect Volunteer Fire Department and is a past vice president. He worked mainly in collections while at the hospital and his last title was as a budget and reimbursement analyst. Overall, he worked at the hospital over 22 years before the consolidation of business operations.

“Pretty much worked in all facets of the preparing the general ledger, financial statements, payroll, accounts payable, fixed assets and so the primary emphasis over the years was in the receivables,” Murdock said.

He currently works at the Buckingham Correctional Center as a food operations supervisor.

Asked why he wants to be treasurer, Murdock offered that he's proud of the service through the fire department and through their years at the hospital and that he enjoys working with people.

“It would be an opportunity for me…It would be a advancement in my current career,” Murdock said.

Murdock offers that he's hands-on and does not want to be an unseen figure at the treasurer's office.

“Some of the other things that appeal to me is it's not directly a real political position. I'm not setting policy or voting, I'll be following the directives of the board and the state.”

Murdock says he would like to make sure that “all are paying their fair share. I don't like the idea of people not paying their taxes and not facing whatever consequences are available.”

He says he feels that's the only way he can directly impact keeping taxes as low as possible would be to collect-citing exhausting all avenues that are available through the office.

Democratic Nominations Made In Cumberland