A Brand New Look For The Dukes 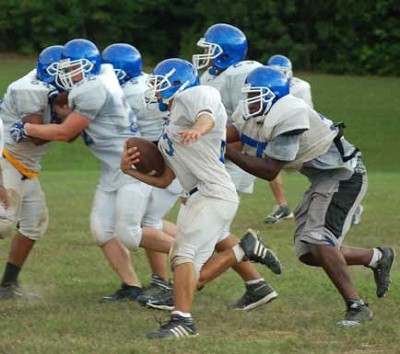 Though it's hard to tell in black-and-white, the Cumberland High School football team will show off a new look this season with new uniforms and blue helmets for the upcoming season.

Over 60 players between the varsity and junior varsity are working toward a September 2 season-opening contest against longtime rival Prince Edward. Cumberland head coach Michael Sutton said that the varsity will consist of a full-time roster of around 27 or 28.

In addition to the new uniform combinations, the Dukes are also changing some things up on offense. This Friday, Cumberland will host West Point and William Campbell in a three-way scrimmage beginning at 6:30 p.m. Admission to this scrimmage, as well as scrimmages hosted by Buckingham, Fuqua and Prince Edward, are free.