We Keep Making Dollar Coins That None Of US Wants 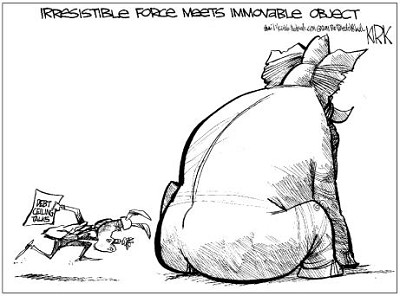 A billion dollars doesn't mean what it once did.

Somebody drops a billion dollars on the sidewalk and they hardly ever stop to pick it up anymore.

If I had a dollar for every billion dollars I've seen stuck in chewed gum on the pavement I'd have, well, nothing, to be honest.

Which makes it rather maddening that the Federal Reserve is sitting on more than one billion dollars in dollar coins.

According to an astonishing joint inquiry by National Public Radio's Planet Money and Investigations team, more than $1 billion in dollar coins, which cost U.S. taxpayers $300 million to produce, are gathering whatever dust manages to infiltrate Federal Reserve vaults.

And a Congressional mandate will see millions and millions more of these coins produced until every U.S. President has his head on a dollar coin. No matter that they won't ever see the light of day.

So, as our nation faces default on its debt, we are spending millions on more than one billion dollars worth of brand new unused currency.

Blame both political parties for this madness because it was Congress in 2005 that decreed dollar coins should be produced to bear the head of every president. The hope was for the coins to replace dollar bills. They didn't. The dollar coins were as popular as buffalo chips would be as currency. People don't mind being rich, but don't ask them to be stinking rich.

According to the NPR report, the U.S. Mint had gotten as far as Ulysses S. Grant, so the lunacy is going to continue unabated until 2016, adding to the 1.2 billion coins sitting in Federal Reserve storage because nobody wants to use them.

Once every quarter, the U.S. Mint produces a new dollar coin even though, clearly, for the public it was never meant to be.

We could accomplish a great deal of good with $1.2 billion. If the federal government doesn't want the coins perhaps the Federal Reserve would be so kind as to distribute the money here in Virginia's Heartland.

Certainly, we can find something worthwhile for those coins to accomplish.

And we're not talking about depositing them in snack and drink machines but investing them in lives in a way that will bear dividends and interest in meaningful and human ways.

Spending money to create money that will sit idle while people starve and die is an indication of national disease.

Presidential Condolences Deserve To Be Given