Their First Battle Of Route 60 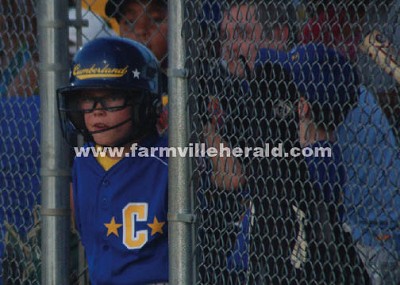 The Buckingham and Cumberland All-Stars met in the opening round of the District IV Dixie Youth Baseball Minors Tournament on Friday at Powhatan's Fighting Creek Park. Buckingham got the best of Cumberland in this match-up, as the BC All-Stars broke open a 12-3 ballgame in the top of the sixth to go on to win 28-3. Cumberland was eliminated from the District IV Tournament in two games, while Buckingham was eliminated on Monday night in its second loss to Goochland. Above, Buckingham's Peyton Taylor beats the toss from Cumberland catcher Isaac Trent to pitcher Garrett Rozier, who was covering the plate.