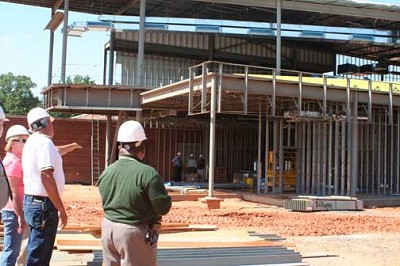 BUCKINGHAM – Before the business portion of its June 29 meeting to close out the fiscal year, the school board took a step into the future as its members toured the elementary school construction project on Route 20.

VMDO architects Bob Moje and Kelly Callahan, along with Ivan “Chip” Davis, BCPS facilities director, served as tour guides, providing insight into what the facility will offer once completed. They were accompanied by Dr. Edward Chernault, clerk of the works for the project; and, Ed Atkins, project superintendent with Blair Construction.

The tour began in the lower elementary school, a building that closed circa 2002 and last served as a middle school. After walking through that building, the group passed the metal framework that will support a cafeteria and library shared by both schools.

Next, they traveled down the hallway of what will be the upper elementary school. The Dillwyn Elementary School building formerly housed fourth and fifth graders until it closed in June 2010, in anticipation of the renovation project.

Although a long way from completion, the construction thus far demonstrates that both buildings are transforming into modern facilities. Walls have given way to windows. Reconfigured hallways and classrooms yield areas that promise to be conducive and accommodating to learning.

Throughout the tour, school board members commented on the way the open design makes the buildings seemed much more spacious and bright.

“It's amazing,” offered Thomas Hutcherson as he walked through the hallway of the lower school. “I love it,” he added.

With the help of the architects and Davis, the school board learned about the HVAC systems and lighting; highlights of the interior construction as far as classrooms, learning resource areas, and security; and, the integrated structural integrity of the renovations.

Although the actual start date of the project was delayed due to efforts to obtain the best possible financing arrangements and meet federal guidelines involved with the Davis-Bacon Act, construction is now in its 33rd week.

The project's overall completion date is set for early April. However, if the project moves forward as anticipated, the substantial completion date, which would allow occupancy, is expected to be sometime in late winter or early spring of 2012.

After the tour, the board continued the meeting in the Window Room at the Career and Technical Center.

Concurring with a recommendation by Superintendent Gary Blair, the school board approved the FY12 budget with the final adopted figures from the board of supervisors.

Dr. Blair explained that the revised budget, which went from a proposed $24,483,929 to $23,519,011, includes the previously discussed level one cuts and reduction in force.

While focusing on financial matters, the board also approved end-of-the-year bills and accounts.

When students return to school in late August, they will be paying ten cents more for lunch. On Wednesday, the board voted to increase the price from $1.75 to $1.85. Lunch prices for adults will also go up from the current $2.75 to $3.

During its June 8 meeting, the board postponed action on Blair's recommendation to increase school lunch prices.

At that meeting, the superintendent explained that the increase was prompted by the Child Nutrition Act's equity in school lunch pricing provision. The act requires setting a price for lunch based on the federal reimbursement difference between free and paid lunches.

The proposed increase prompted a discussion about the actual cost of lunches for the school division. In turn, Chairman Allen suggested reviewing the data and postponing action until the June 29 meeting.<br />
On Wednesday, Blair reported that the average countywide cost of a student lunch is $2.60. He added that the cost of lunch at Buckingham Primary is $2.79; Dillwyn Primary $2.12; Gold Hill $2.01; Buckingham Middle School $2.43; and BCHS $2.97.

The superintendent noted that the main difference in the costs is due to the salaries and benefits of cafeteria employees based on their length of service.

Subsequently, the board approved the price hike. However, Kathy Midkiff voted against the increase; and, David Christian was absent.

Superintendent Blair shared information about the division's opportunity to apply for a grant through the Tobacco Indemnification Commission to explore the feasibility of using biomass for heating and power at the high school and middle school.

He said the fuel savings could amount to approximately $150,000 annually.

Noting that they were a long way from accepting anything, Blair said he thought the concept did deserve a look. He added that the deadline for applying for the study was July 15.

Blair said the biomass plant would cost approximately $1.3 million but there is a possibility of receiving up to 90 percent in TIC grant funding for that phase, if the study warranted pursuing the idea.

“Since we are in central Virginia, I think the underscore is that we could be a demonstration site for other school divisions,” offered Blair.

After Blair's presentation, the board unanimously agreed to the feasibility study and authorized the superintendent to prepare and present an RFP, request for proposal, to investigate the feasibility of working with Public Policy Virginia and the Tobacco Indemnification Commission for potential biomass heating and power sites.

The board approved FY12 payroll due dates and distributions dates as presented.

After some discussion, the board unanimously agreed to award a contract for an L.P. gas supply system at the upper and lower elementary schools on Route 20 to Ellington Energy Services, with a low bid of $46,727.

“That way if we have a gas failure, you would only lose one school-you wouldn't lose them both at the same time,” he stated. He added that more tanks are needed at the upper school because of the kitchen and a generator.

Although Ellington would be installing the supply system, Davis said the school division would be able to bid out the fuel and would not be tied to any particular company.

Vice Chairman Ed Wise questioned the receipt of only one bid that actually responded to the specifics of the request. He offered that it would be nice to have at least two bids that were bidding the same specifications.

“Where are we on time?” asked Wise. Davis responded that the contractor was ready to start putting in the gas lines for the buildings.

Davis added that Ellington would be using the same contractor that has been doing the excavation work at the site. “So only one company would be doing the site work,” he shared.

Blair noted that all of the contractors who initially expressed interest in the work were contacted with the details. He added that two were late submitting their bids and one had a different proposal, which was for $141,000.

As the discussion continued about the bid response and that the two bids received before the deadline were not comparable, Pete Gowin offered, “They all had the opportunity.”

Other School Board Action

The school board approved Blue Ridge Therapy as the provider of occupational, physical, and speech therapies for the 2011-12 school year.

Additionally, the board approved bids from Pet Dairy, for dairy products; Flowers Bakery Company, bakery products; and Hill City and Wood Company for food/supplies, for FY12.

Moreover, school board members also agreed to continue with the Virginia School Boards Association for the division-wide insurance policies.

Completing another annual task, the board approved the NCLB Consolidated Application for Federal Funds in the amount of $845,170.66.

Concurring with the superintendent's recommendation, the board approved the gifted plan as presented. Dr. Blair explained that the updated plan included some modifications in the by-laws and a new advisory council.

Noting a list of over 50 policy changes recommended by the Virginia School Boards Association, Dr. Blair explained that he would be glad to outline or discuss the revisions before the board votes on them next month.

The next meeting of the school board will be held on the third Wednesday of the month, July 20, at 6 p.m., rather than the usual second Wednesday schedule.