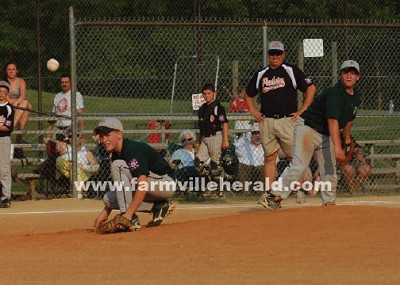 DILLWYN – Things were going along pretty well for the Buckingham County Majors All-Stars in their District IV contest against Powhatan American at Gene Dixon Sr. Memorial Park on Wednesday night.

The BC All-Stars held a 2-0 lead in the top of the fourth and were in a good position to earn District IV's third spot into the Virginia Dixie Youth Baseball Tournament.

Then the bottom fell out.

Rain – and lots of it – put a sudden end to the night's festivities, which also included the Distirct IV Championship contest between Amelia and undefeated Goochland.

A 30-minute thunderstorm left a six-inch puddle between first and second base, rendering the field unplayable. The BC/Powhatan National game was to be picked up where action stopped with Powhatan at bat with two out in the fourth inning and two runners on base.

“It's not a good time to postpone a game, but we really didn't have any control over that,” said Buckingham manager Charlie Allen.

Playing as the home team, Buckingham jumped out to a 2-0 lead in the bottom of the first inning on a two-run home run by Harley Gough.

Buckingham had chances to extend the lead in the bottom of the second but left runners on first and third.

“We missed some big-time chances,” said Allen. “We had some miscues here and there that cost us some runs, and hopefully that doesn't come back to get us.”

Buckingham pitcher Devin Allen gave up a sharp single in the first inning, but settled down after that to keep the Powhatan bats silent into the fourth inning, before giving up a walk and a hit just before the storm arrived.

“He did a good job of hitting his spots,” said Allen. “I position the catcher on every pitch, and when our pitchers can hit him, we put ourselves in position to win ball games. He was able to do that tonight.”

Devin Allen, who was still on the mound when the game was paused was eligible to continue pitching on Thursday evening, but would likely be lifted when play resumes.

“He was throwing well, but he's thrown around 60 pitches. We're not in the business of throwing out a kid's arm, especially when we have another pitcher who we can put out there with confidence.”

To get into the third-place game, Buckingham defeated Cumberland on the first day of the tournament, and moved to 2-0 with a 4-3 come-from-behind victory over Amelia on Sunday. Goochland defeated BC 12-2 on Monday, and Amelia returned the favor with a 9-7 victory over Buckingham on Tuesday, which sent the tournament hosts to the playoff game to decide which third-place team will get the bid into the State Tournament.

“These are two good teams playing here tonight, and the winner will represent the district well,” said Allen. “We've got a good defense. We haven't been hitting that well, however. We can hit, but we're just not doing it. If we can get a win in this game, I think we'll be able to work things out between now and the time the state tournament begins. But we've got a couple more innings here before we can think about that.”