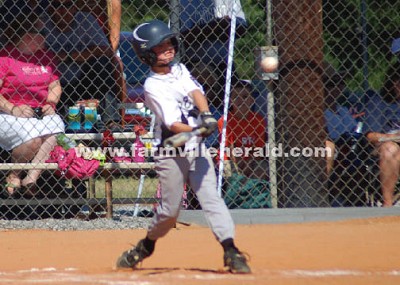 CHARLOTTE C.H. – Generating offense has proven to be no trouble for the Prince Edward Farmville Youth Association Minors All-Stars team in the Dixie Youth Baseball Minors (AAA) District V Tournament over the weekend at the Charlotte Court House DYB Complex.

So much so, that the PEFYA All-Stars find themselves in the tournament championship round as the lone undefeated team as of Tuesday morning's press time.

In its four games, PE Farmville has reached double-digits in all of its games, as it attempts to bash its way to its first District V Minors title since the 1998 season.

Prince Edward Farmville took advantage of one of two big rule changes for 2011 in Dixie Youth Baseball in its tournament opener against Dinwiddie American.

A rule change states that a team can now win by slaughter rule if it holds a 15-run lead after three innings.

A 19-run inning for PEFYA in the bottom of the first helped the PE Farmville All-Stars to the three-inning victory.

Prince Edward Farmville allowed four runs to Dinwiddie American in the top half of the inning, but did almost all of its damage with one out in the bottom of the first.

All 12 members of the squad managed to score at least once, as PEFYA sent 25 runners to the plate in an inning that showcased the All-Stars' aggressive style on offense.

Drew Osborn was 2-3 on the afternoon with two doubles and three runs scored, while Austin Mahan also managed to score three runs on a 2-2 (one walk) performance. Cody Kitchen pounded out three singles and scored two runs, while Matt Osborn reached base three times (1-1 two walks).

The hits kept coming for the PEFYA All-Stars in its second day contest against Lunenburg. They needed almost all of the 19 runs they managed to score against what would turn out to be the other Tournament finalist.

PE Farmville responded in the bottom of the fifth with 11 runs of its own to take a 19-14 lead.

No. 2 hitter Tanner Cyrus and No. 3 hitter Matt Osborn walked, and were doubled home by clean-up hitter Christian Adams, who doubled. D.J. Williams (double, single), Austin Mahan, Isaiah Dailey and Tanner Cyrus each pounded out singles as the PEFYA All-Stars stormed back to take the lead for good.

Lunenburg managed to score one run in the top of the sixth, but the game ended on a ground-out back to the pitcher.

Prince Edward Farmville built a comfortable lead and managed to hold on in Day Three's game against Dinwiddie National.

The PEFYA All-Stars fell behind 4-2 after two innings of play, but scored eight runs in the bottom of the third to take a 10-4 lead.

Dinwiddie National settled down to hold PE Farmville scoreless for the final three innings, but enough damage was already done.

Cyrus was 1-1 (two walks) with a double and two runs scored. Adams was 2-3 on the afternoon, while Mahan 1-3 had a double and a run scored.

Prince Edward Farmville advanced to the Championship round of the tournament with its most tame outing in four games with a 10-4 victory over host Charlotte.

Adams and Williams singled and scored in the bottom of the fifth to give PEFYA two more insurance runs. A double by Isaih Dailey scored both runners.

Matt Osborn went the distance on the mound for the PEFYA All-Stars. He gave up four runs on six hits and just three batters.