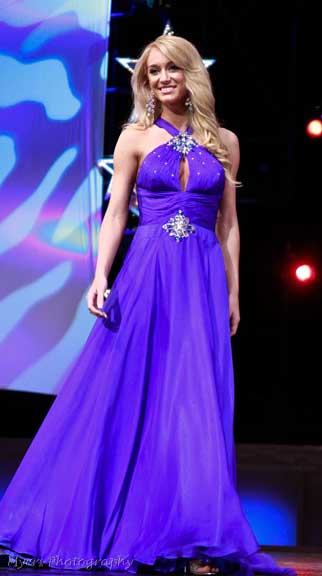 PRINCE EDWARD – She's a 2010 graduate of Prince Edward County High School and has had all the fun that goes with being a double major at Liberty University and pulling 18 credit hours this spring while making the Dean's List.

Courtney Garrett can add one more title to her busy life: first runner-up at the 2011 Miss Virginia pageant.

“Oh goodness, certainly not to make first runner-up,” gushes the 18-year-old with a laugh when asked about her expectations prior to the pageant. “That was not even on my radar.”

Of course, she's quick to add, every girl wants to walk away with the crown, but she wanted to leave saying she did her best and to gain attention for her platform C.A.R.E. (Communication And Respect For Everyone).

On both counts, not bad. Not bad at all.

Courtney's platform is about promoting understanding and awareness-a lot of which, she cites, comes from having a handicapped brother.

“The biggest thing that I wanted to leave with was…taking hold of that opportunity and being able to share my message with a huge audience of people-not only on the stage, not only the judges, but then having that live television cast. I had the opportunity of possibly getting to speak out more about my platform,” Courtney said.

“So those are the two things that I wanted to walk away with no matter where I placed, no matter if I fell on my face on stage, as long as I did my best and I was able to speak out for those people, those are the most important things,” she added. “And, in terms of placing, you know, I was like if I could make the top ten that would be great, but if not, being able to do those two things would be great. So making first runner-up, was just…not even planned, not even expected, nowhere near did I ever think in a million years. I…kept looking at the emcees going are you sure that you're announcing the right names…is that correct?”

It was, indeed, true that one of the youngest contestants in the pageant had scored first runner-up. And, quite possibly, it's also a first for the rural Pamplin community to have a first runner-up in the Miss Virginia Pageant.

For those keeping tabs, what happened may not be such a surprise. Courtney has captured other pageant titles, including Miss Lynchburg earlier this year.

But it all just may have started some 15 years ago with that first competition in the Tiny Miss Appomattox pageant.

“I was three years old and we got a flier from the mall and my dad said you know what, let's put her in this little pageant…she loves being on stage, she loves dressing up-I'm completely and totally a girly girl. And, so I tried it and I won my first pageant and we continued…to go from there,” she reflected.

“And I remember getting in it and I remember it was so itchy and I didn't want to wear it and then mom was like, you get to go on stage and smile at everybody and so…I was like 'Oh, OK, then, I'll wear it” you know,” Courtney laughs.

She is the daughter of Steven and Jeanine Garrett of Pamplin and has two younger brothers-Austin and Ryan. She's not altogether a girly girl. Courtney was a student athlete at Prince Edward County High School where she played soccer and volleyball and she was also on the swim team and rode horses on her grandparents' farm.

Winning the Miss Lynchburg Pageant on January 29 opened the eligibility for the Miss Virginia Pageant, which was held at the end of June in Roanoke.

A lot has gone into the wardrobe.

“…You wouldn't believe how many pieces of clothing you would need for the week-just one week at Miss Virginia, but you do,” Courtney said. “You need so many different clothes and shoes and everything.”

She says it's the “best excuse to go shopping ever,” concluding with a chuckle.

“…You just want to be prepared as you can be from the song (she performed an original arrangement of Over The Rainbow), to modeling and then the big part is the interview,” Courtney said. “It's a lot of practicing interviews…which I really love about the Miss America organization is their very…challenging interviews. You have ten minutes with a very highly esteemed panel of judges and they ask you anywhere from community service involvement to issues facing the youth, politics, domestic and foreign affairs, it's a very, very intense interview and so there's a lot of watching the news, a lot of mock interviews.

Her family had a send-off party prior to the competition that featured 30 contestants from across the Commonwealth.

Many of them, too, made the trip to Roanoke.

“…Our biggest hope was that she'd get top ten,” her mom Jeanine said. “That's really what we wanted. So after top ten, I kept waiting for her to…not make another step. I figured top ten, that's great. When she made top five…I was just, I guess, flabbergasted 'cause we never expected her to make top five. She did a fabulous job, but being 18 and her first year doing it, we were really hoping for a top ten.”

Once she made the top five, Jeanine adds, she was thinking OK, fourth runner-up is incredible.

“…When it got to the last two, I looked at my husband and I said, 'Oh my…is she actually gonna win this?'” Jeanine laughs in reflection. “And then I think I actually said 'Am I ready for her to win this?'”

While she didn't win the title Jeanine says to get first runner-up was a shock.

“I think we were in shock for most of the night,” she laughs.

Collectively, Courtney walked away with just over $9,000 in scholarship money-$8,300 for being first runner-up, $750 as a Quality of Life finalist, and she tied with the young lady crowned Miss Virginia for the Spirit of Miss Virginia award (voted on by the contestants) $250 scholarship.

Courtney is currently majoring in music with vocal performance and communication. Her mom notes the scholarships couldn't have come at a better time.

“You know what, you would think,” Courtney said, when asked if there were a little disappointment. “And after all that hard work and months of planning and months of preparation, I really wanted it, but in that moment…before I went into final night…it's really easy to get disappointed and upset after all the hard work that you put in, but…I prayed about it and I said you know whatever happens tonight is gonna be what's meant to happen, it's gonna be what's best for me because God's plans for me are best.”

When she got to the final two, Courtney reflected, “…Of course, I'm like oh my goodness, I want to be Miss Virginia so bad, but to stand there and see Elizabeth (Crot), who is now Miss Virginia, I looked up to her before and I've seen all that she's worked so hard for-she's been doing it for five years-she's such an incredible and intelligent woman and I know that it was the right person because it was her time. She'd worked really hard and I couldn't be happier that she had won it. And…there's moments I thought 'Oh I could really, really be happy if I won.' I really didn't feel any feeling or an overwhelming sense of disappointment because I was just so proud of myself that I'd made it that far and never in a million years did I think I could make it that close. And then I was even more happy to see it go to such a deserving person.”

Courtney, who is involved in Area 12 Special Olympics, will continue to serve as Miss Lynchburg and promote her platform. This fall, she will be a sophomore at Liberty.

And maybe, just maybe she'll get another shot at the title.

Project ARCH Will Give Local Primary Care For Veterans