Home At Last: Collaboration On 'Miracle' 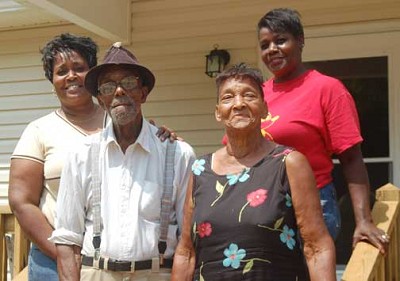 Imagine a sweltering summer day in Southside Virginia. With the thermometer inching toward the 100-degree mark it's time to turn on the air conditioner. But what if there is no electricity? Without power, not even a fan can stir the hot muggy air. A shower might help, but there's no running water either – or even a bathroom. Until the first week of July of this year, this was the day-to-day life of Fred Brown, age 85, and Lorean Harvey, age 80.

Now in a new and modern home, the couple believes they have seen a miracle.

“My mom and my step-dad lived on their property for the past two or three years without electricity or running water,” stated Laverne Harvey Epps. “They raised all of us children and some of the grandchildren and all that time carried water from a spring.”

During that time the couple raised “two sets of children.”

“He had his children, and mom had her family,” Epps related.

Originally there was a house and a trailer on the property located on hilly terrain just off Route 460 east of Farmville. A total of 21 children called it home.

“Some of us kids were in the trailer, and some were in the house,” Epps recalled. “There was no bathroom, but we did have power. We heated water on a gas stove or we put jugs of water on top of the trailer.”

When the house burned down several years ago, the octogenarian couple moved into a donated trailer that had been used for storage.

“They lived in that trailer without electricity or water,” Epps continued. “They are getting up in years. I just felt in my heart that they deserved something better.”

“That's one of the things HOPE does – help people get water in their homes,” stated the Rev. Dr. Kitty Smith, executive director of HOPE. “Ms. Epps came in and explained to our staff what was going on with her parents. We did the initial interview and turned it over to Southeast RCAP.”

“I found the couple living in an old trailer about to fall down,” he reported. “They were using an old privy for a bathroom. The day I went, Mr. Brown was cooking something in a pot out in the yard.”

An application for a well was submitted late last summer.

“We also tested for a septic system, but it didn't perk,” Freed related. “Then Southside Outreach got involved and put in an alternative septic system. It was a real community involvement project.”

“Their home was in such bad shape we couldn't help,” Dr. Smith said. “So our staff put them in touch with an agency that could build their house.”

“They gave me a paper with all the outreach groups,” Epps related. “I started calling them all. The one that came out was Southside Outreach. They looked at the situation in the trailer.”

Their inspection confirmed what other agencies had reported – the old trailer was beyond repair.

“The person from Southside Outreach asked my dad if he wanted a new home,” Epps said. “At first my parents thought he was joking. Then the man shook my dad's hand – and it's been ongoing since.”

The Southside Outreach Group is a 501 (c) 3 non-profit organization that has been servicing the counties of Halifax, Henry, Amelia, Nottoway, and Prince Edward since 1995. They offer the following programs: Minor Housing Rehabilitation, Indoor Plumbing/Rehabilitation, Homeownership Opportunities, and Housing Counseling. Their mission is to assist income eligible persons in obtaining affordable, safe, decent and sanitary housing.

“It's a needed program,” stated Earl Howerton, Southside Outreach executive director. “A lot of folks out there still don't have adequate plumbing.”

Howerton explained that the Department of Housing and Community Development gives final approval for the projects. Once the project is approved, Southside Outreach goes to work hiring contractors and making weekly inspections of the work site.

Once work began on the Brown's home it was, as Ms. Epps stated, ongoing.

“My dad would sit under a tree every day and watch,” Epps related. “Every day he told me – 'I hope I don't die until the house is done!' “

“People don't believe there are still homes without indoor plumbing, but they're out there,” Bartlett stated. “We've done seven projects with Southside Outreach in the last three years, and four of them involved substantial reconstruction.”

The County administrator hopes to let more local citizens know what services and programs are available.

“When people call us with plumbing or housing issues we forward the information to Mr. Howerton at Southside Outreach,” Bartlett added. “The word needs to get out so we can find people and help them – we're here to help.”

“It helps everybody by increasing tax values and making better neighborhoods,” he noted. “It's better for everybody.”

For the Brown household, better is an understatement.

On a recent summer day, Lorean Harvey and Fred Brown were sitting in their new living room enjoying the first home air conditioning experience of their lives.

Looking around her tastefully furnished home, Lorean Harvey marveled, “I never thought I would have a house – it's a miracle!”

Furnishings for the Brown home, once again a community effort, were all acquired through donations.

“I went around to all the stores in Prince Edward and asked them for donations,” her daughter said.

Each of the agencies involved in the construction of the Brown home agreed on one point.

“It's a collaborative effort,” Southside Outreach Executive Director Howerton summed it up. “Put all of it together, and you can do a lot.”

“It's an amazing story,” Laverne Epps concluded. “When the people at Southside Outreach asked me how I found them I told them – it was the grace of God.”

Fred Brown and Lorean Harvey will be the first to agree – that, after all, is where miracles begin.